All About Clopidogrel: Uses and Side Effects

Clopidogrel inhibits the most important complex for fibrinogen: the glycoprotein IIb/IIIa complex. This inhibition prevents the binding of fibrinogen to platelets and, ultimately, platelet aggregation. Learn all about clopidogrel in this article! 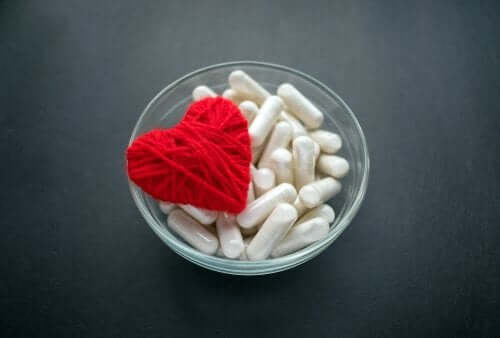 Clopidogrel is an anticoagulant drug. In other words, it helps prevent blood clots and, ultimately, clogged arteries. In this article, we’ll be learning all about clopidogrel.

The recommended dose is 75 mg once a day. Nevertheless, patients should start treatment with a single 300-mg dose if they suffer from acute coronary syndrome, except for people over 75 years of age who have suffered a heart attack and ST segment elevation.

How and why do clots form?

Blood clots are clumps that form when blood hardens from liquid to solid. Depending on where the clot forms, it’s either a thrombus or embolus.

Hemostasis is the process that maintains the integrity of a closed, high-pressure circulatory system after vascular damage. There are two types of hemostasis:

Once a clot is formed, the process of fibrinolysis takes place. During this process, once the tissue damage has been repaired, different systems work together to try to remove the remains of the clot.

When these systems of hemostasis and fibrinolysis are altered, pathological states such as hemorrhages or thrombosis appear, which leads to cardiovascular diseases. On the other hand, certain situations and factors favor the formation of clots, such as:

Regarding prevention measures, it’s essential to lead an active life, adopt healthy lifestyle habits, and avoid harmful substances, such as tobacco and alcohol.

All about clopidogrel: mechanism of action

In order to trigger its anticoagulant effect, the liver has to activate clopidogrel. In other words, it must metabolize first. This way, it produces its active substance. Once the liver forms the metabolite, it selectively and irreversibly inhibits platelet aggregation.

It does this by inhibiting the most important complex for fibrinogen: the glycoprotein IIb/IIIa complex. The inhibition of this complex prevents the binding of fibrinogen to platelets and, ultimately, platelet aggregation.

As the metabolite of clopidogrel irreversibly modifies platelet receptors, the platelets that are exposed to this drug will be altered for life. Furthermore, it also inhibits platelet aggregation induced by other agonists.

Read on to learn more: 6 Types of Heart Disease and the Symptoms They Cause

The adverse events of clopidogrel

Like all drugs on the market, clopidogrel can cause a series of adverse events. We understand adverse events as those undesirable and unintended events that a patient can expect when they start treatment with a drug.

In this regard, the general tolerance of this drug is good, according to clinical trials and studies. However, the most characteristic adverse event of this type of drug is bleeding.

Patients reported hemorrhages mainly during the first month of treatment. Compared to other medications, such as acetylsalicylic acid, clopidogrel causes less gastrointestinal bleeding and dyspepsia.

However, it does increase the risk of diarrhea and rash. Other adverse reactions that the treatment with this anticoagulant can cause are:

Furthermore, it’s important to note that concomitant treatment of clopidogrel and acetylsalicylic acid significantly increases the risk of bleeding, compared to monotherapy.

This article may interest you: All About Heparins and How They’re Administered

Conclusion on all about clopidogrel

This is a drug that’s usually administered with acetylsalicylic acid to prevent clot formation in patients who’ve suffered a cardiovascular illness.

It’s important to monitor the adverse effects of this drug, especially if it’s administered along with other anticoagulants. This is because the possible bleeding this can trigger is serious.

Remember that adopting healthy lifestyle habits is the best way to prevent any disease.

The Anticoagulant Properties of Garlic
For generations people have talked about the anticoagulant properties of garlic and its other health benefits. But how much of this is true? Read more »
Link copied!
Interesting Articles
Medication
Trastuzumab: Therapy Against HER2 Positive Breast Cancer