All About Celiac Disease or Gluten Intolerance

Gluten intolerance is a chronic disease that’s characterized by a nutrient malabsorption because the mucosa of the small intestine is damaged. If a doctor makes a correct diagnosis, the patient can avoid many symptoms and complications. 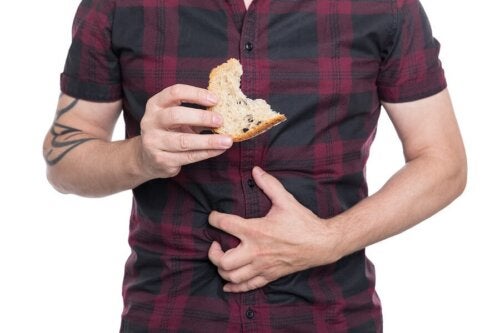 Celiac disease or gluten intolerance is a chronic hypersensitivity to a protein in some foods, such as cereals. Experts estimate that it affects approximately 1% of the population and is more common in women than in men.

In Spain, for example, it may afflict approximately 500,000 people and the numbers increase every year. One of the most worrying things is that approximately 75% of affected people haven’t been correctly diagnosed.

This gluten intolerance occurs in people who have genes that make them prone to suffer from it. It’s characterized by an immune-based inflammatory reaction in the mucosa of the small intestine. This affects the absorption of macro and micronutrients.

As we mentioned above, it’s a chronic autoimmune disease. This means that the immune system itself attacks cells as a form of protection.

What’s the cause of the manifestation of gluten intolerance?

No single cause is responsible for the development of gluten intolerance. It’s a combination of factors that makes the intolerance appear.

A genetic predisposition, certain structural abnormalities in the small intestine, and a gluten diet are examples of predisposing factors to the development of gluten intolerance.

For all these reasons, we can say that it’s a bowel disease that manifests in genetically susceptible people. These people are unable to digest a protein present in gluten, called gliadin.

Thus, when these people eat foods that contain gluten, their small intestines react and become inflamed. When this occurs, the intestine has difficulty absorbing the nutrients in foods.

It isn’t easy to diagnose gluten intolerance. This is because, until not long ago, it was only diagnosed if there were clear clinical symptoms. In addition, this disease has a wide variety of symptoms that can be attributed to other diseases.

However, according to some experts, even if there are no symptoms, it’s possible to detect the disease if it’s suspected, either by relatives who are intolerant or for other reasons. For this reason, doctors request serologies, genetic tests, or histology.

On the other hand, at present, medical professionals may also request clinical diagnostic tests, such as blood tests that include serological markers of celiac disease. These markers are antibodies, such as:

Read on to learn more: How to Make Gluten-Free Granola Bars

The symptoms of gluten intolerance

If a person intolerant to gluten ingests any food that contains it, this triggers an autoimmune response that causes inflammation and deterioration of the mucosa of the small intestine. Thus, the following symptoms, among others, usually occur:

In adults, most cases manifest with discreet symptomatology, with symptoms such as mild diarrhea, weight loss, anemia and, in 10% of cases, constipation.

Since the small intestine is unable to absorb the necessary nutrients, intestinal malabsorption occurs. Due to this, other symptoms, such as bruising or nasal bleeding, may occur.

In turn, it’s normal for the patient to feel tired or suffer from itchy skin, eventually developing dermatitis herpetiformis (DH) and even hair loss.

In addition, mouth ulcers also appear, and women often suffer from missed periods. Likewise, muscle cramps or intolerance to other nutrients, such as lactose, are common as well.

This article may interest you: The Best Diet for People with Celiac Disease

Is it possible for someone to suffer from asymptomatic celiac disease?

Keep in mind that not all patients who are intolerant to gluten suffer from the symptoms we mentioned above, as some of them are asymptomatic.

In these cases, you may ask yourself how it’s possible for them to be diagnosed with this disease if they don’t have any symptoms.

The explanation for this is that gluten intolerance is a disease with a genetic predisposition. In addition, for a doctor to be able to diagnose it, as we mentioned above, they need to request a blood test with the markers of the disease. However, intestinal deterioration can be observed after a biopsy.

In short, even if a patient doesn’t manifest the most obvious symptoms, such as vomiting or diarrhea, their intestinal mucosa may still be affected. Therefore, the involvement of the mucosa can evolve to other diseases or the patient can suffer the same complications if they don’t follow a correct diet.

We hope you enjoyed learning about celiac disease or gluten intolerance!