The problem of female genital mutilation is the lack of awareness, because many people still consider this to be a necessary practice that’s accepted by communities. 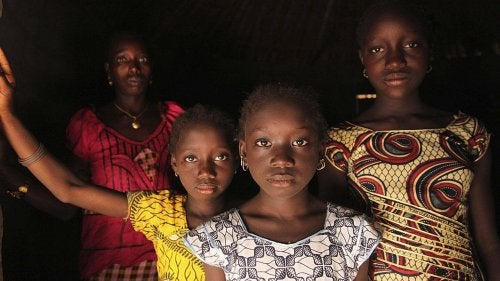 This is the kind of news we love to share with you. Africa has said “NO” to female genital mutilation.

Not long ago, we described how countries like Nigeria had taken the initiative to begin to regulate and punish this tradition.

Now the grain of sand becomes larger, with the hope of garnering even more support.

It has finally become an agreement that the African Parliament, based in South Africa, will undertake to regulate, prosecute and finally abolish this horror that has scarred nearly 200 million women worldwide, according to UNICEF.

Below, we’ll give you all the details.

Female genital mutilation, a horror with too many victims

Female genital mutilation is not a problem that’s unique to Africa. The removal of the clitoris is also a practice in almost all Muslim countries in Asia.

Kurdish communities, as well as those in Afghanistan, Tajikistan, Brunei, Malaysia and Indonesia also practice this. And in these countries a more extreme type of mutilation is carried out.

They use infibulation, which involves removal of the clitoris and the labia.

3 Things to Pass Onto Your Teenager

We know that this is a battle that has ended yet. But we also know that this giant step taken by Africa is, at least for now, an agreement with the intent to become law.

For now, it remains only a proposal that has yet to turn into a legal document.

As we said, however, this is a big step to ending a horror that has already claimed too many victims.

It’s not a ritual, it’s a violation of human rights

Hygiene is at a minimum. The risk of infection is extreme. Many have died due to this practice.

All of this leads us to a resounding conclusion. This is not a ritual practice. It’s a violation of human rights. It is an incomprehensible and savage act that millions of girls suffer before even reaching their fifth birthday.

Women’s Day: For a More Egalitarian Today and For the Girls of Tomorrow

The agreement and the beginning of hope

Africa has said “NO” to female genital mutilation and the world has heard the news. It’s worth knowing more about the details, however.

This difficult battle will take time

The purpose of this agreement is to reach the same achievement as Nigeria. The authorities who signed it are aware of the great difficulty this presents.

In some countries like Guinea, in spite of saying “no” to female genital mutilation, the practice continues. They do it for very clear reasons.

Nevertheless, as the humanitarian organizations say the shift of consciousness has begun. So much so that many believe that in a few decades female genital mutilation will finally be a thing from the past.

The Incredible Story of Hope, The Child Witch
Believed to be a child witch, little Hope was abandoned and left to fend for himself. In this article, we'll discover his story of strength and courage. Read more »
Link copied!
Interesting Articles
Did you know?
Why Do We Have Armpit Hair?