The administration of anti-inflammatory drugs to control cramps and the contraceptive pill often help relieve symptoms of adenomyosis. Read on to learn more! 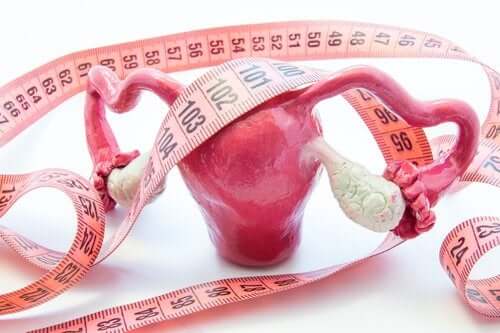 Adenomyosis is a disease that thickens the walls of the uterus. As a result, women who have it suffer pain, bleeding, and severe cramping, among other symptoms we’ll discuss below.

This disease occurs when the tissue that normally lines the uterus, the endometrial tissue, develops in the muscle wall of the uterus. The displaced tissue continues to operate normally, thickens, degrades, and causes heavy bleeding during the menstrual cycle.

Adenomyosis is a benign and common disorder in women who have given birth between the ages of 35 and 50. Also, this condition may manifest in two ways, taking into account the amount of involved tissue:

The exact causes that trigger this condition are unknown. Some scientific explanations are:

However, keep in mind that, whatever the cause, the growth will depend entirely on the woman’s estrogen levels.

Approximately one-third of women who suffer from this disease have no symptoms. The other two-thirds do have symptoms, the main one being heavy menstrual flow and painful cramps.

Also, women with this condition may bleed after having sex.

You may also want to read: Why You Feel Pain During Menstruation

Other common symptoms of adenomyosis are:

Although it’s not a harmful disease, pain and excessive bleeding can alter patients’ lifestyles. Women affected by this disease may avoid doing activities they once enjoyed due to their intense pain or concern that they might start bleeding.

The uterus can be visualized using ultrasound techniques or magnetic resonance imaging. The first technique is the most effective and available. Thanks to ultrasounds, medical professionals can see the uterus heterogeneously without the well-defined focal masses that characterize disorders such as myomas.

Regarding the second technique, MRIs represent an improved diagnostic capability because they have a better resolution and show higher contrast images, particularly in the differentiation between adenomyosis and uterine fibroids.

However, asymptomatic women who show no uterine volume increase can be diagnosed with absolute certainty only through uterus assessment after a hysterectomy.

The only effective treatment for adenomyosis is the surgical removal of the uterus or hysterectomy. Because the symptoms tend to worsen after ages 40-45 and disappear after menopause, most women don’t have to resort to radical treatments.

The administration of anti-inflammatory drugs to control cramps and the contraceptive pill to control hormone release during the menstrual cycle often help relieve the symptoms of this condition.

Read on to learn more: Natural Remedies for Menstrual Cramps

However, medical professionals may consider surgery if the affected woman isn’t even close to reaching menopause, already has children and doesn’t want more, and isn’t able to reduce or control the symptoms of this condition.

5 Facts About Uterine Fibroids That Every Woman Should Know
It is convenient to seek frequent gynecologic visits to obtain an early diagnosis as well as an adequate treatment for uterine fibroids. Read more »
Link copied!
Interesting Articles
Illnesses
Everything You Should Know about Hypochondriasis