Acute severe asthma is a very common reason to be rushed to emergency services. Kids and teens need the most medical attention for this condition. 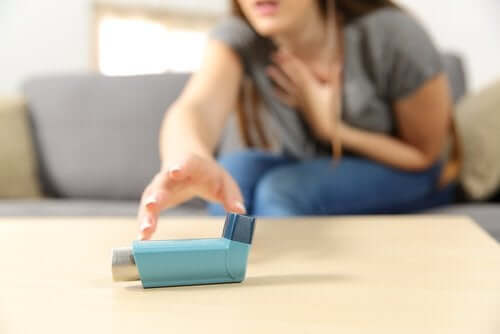 All asthmatic patients are at risk of having an acute severe asthma attack in their lives. In fact, these attacks can be fatal. That’s why going to the hospital and getting proper emergency care are fundamental parts of asthmatic care.

Severe acute asthma is a common reason to go to the hospital. Believe it or not, kids and teens are often the ones who need the most medical attention. Also, it’s slightly more common in women than men.

Asthma is a chronic inflammatory disease of the airways. With asthma, patients have difficulty breathing and other respiratory symptoms.

Asthma mainly happens in the bronchi and bronchioles of the respiratory system. Here, air moves in and out of the lungs. With asthma, what happens is that the wall of these structures becomes inflamed and thicker. It produces less mucus. Also, the muscle that surrounds the walls of the bronchi contracts. Therefore, they narrow and make breathing difficult.

Some asthmatic patients also have issues with the nose and sinuses. This is called rhinosinusitis.

There are different triggers for an asthma attack. For example, they could happen from inflammation, smooth muscle contraction, or both. Allergens, air pollution, and respiratory infections are the main triggers.

What are the symptoms of severe acute asthma?

Overall, the symptoms are different in each person. However, some of the most common are:

Often, these symptoms don’t respond to a fast-acting inhaler.

Acute severe asthma is a medical emergency that you must evaluate and treat quickly. There are two steps to the evaluation:

The intensity of the treatment depends on how severe the attack is. However, no matter what the treatment is, they have the same goals. These goals are:

Doctors can fix low oxygen levels. Generally, they give the patient an oxygen mask or nasal prongs.

These drugs are the best medications to treat acute severe asthma. In fact, they start working in about 5 minutes. Also, they last for about 6 hours with very few side effects.

Inhaling beta-agonists makes them work quicker, and it has fewer side effects than injecting. Doctors only inject it if the medicine doesn’t work through inhalation.

The main reason to use this type of treatment for acute severe asthma is the increase in vagal tone in the airways. This has the best effect when you use repeated and high doses. It contributes to fewer hospitalizations, increased lung functions, and even costs less.

Childhood Asthma: Causes and Diagnosis
Childhood asthma is a very common condition. In fact, it's the most frequent chronic disease among children. It affects between 5 and 15% of children. Read more »
Link copied!
Interesting Articles
Illnesses
What Causes Yellow Skin on the Bottom of the Feet