A Fracture or a Sprain: What's The Difference?

Sometimes it can be difficult to immediately determine whether an injury is a fracture or a sprain. They're both injuries that share certain symptoms, but they're not the same. We explain how doctors tell them apart in this article. 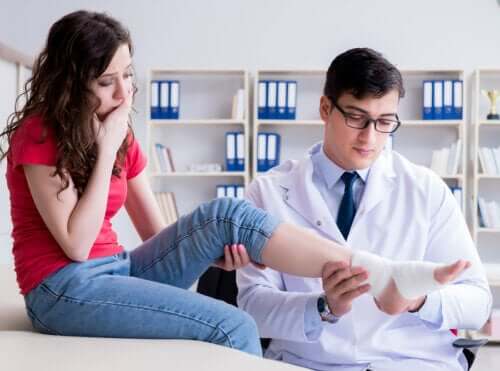 In traumatology, two injuries are among the most common: a fracture and a sprain. We all know someone who’s gone through one of these two circumstances, or perhaps we’ve even experienced them ourselves.

Because they’re such common injuries, it’s logical that they lend themselves to confusion. When faced with a trauma that produces, swelling, and weakness in a limb, asking whether we’re dealing with a fracture or a sprain is a valid question.

The truth is that they’re not the same thing and neither are their consequences. A fracture is more serious, although there are also really serious sprains that put joints at risk. These can negatively affect a person’s work, athletic abilities, and lifestyle.

We must first clarity that a sprain is typically a ligament injury. In this case, the ligaments involved are stretched more than they should be and can’t return to their natural position. In extreme situations, a sprain can involve a ruptured ligament.

On the other hand, a fracture is a bone injury. That’s to say, the bone tissue is interrupted, cut, or deeply injured.

From a sprain to a fracture

Although the doubt about having suffered a fracture or sprain is valid, many believe that the former is a consequence of the poor treatment of the latter. This is not the case. They’re separate entities that aren’t part of the same injury process.

Instead, we can say that there are degrees of severity in these injuries, and in that sense, we can mark a gradation from the mildest sprain to fracture. Again we reiterate, it’s not because one leads to the other, but because of their different severity.

Thus we would have:

Continue reading: Calcium and Vitamin D-Rich Foods to Care for Your Bone Health

Differences between the two injuries

To differentiate between a fracture and a sprain, we need to consider the symptoms, how the trauma occurred, and how the affected area was left after the trauma. The movements that are possible once the injury occurs are usually indicative of the severity.

However, as soon as the injury takes place, they can be easily confused, since they share symptoms. Both cases begin with intense pain and swelling. The area becomes inflamed by the same process that the injured body unleashes and by the accumulation of liquid due to those structures that stretch and break inside.

With hematomas, the situation is more complex. In general, fractures present hematoma and most sprains don’t. But bruising does occur in severe sprains, and there may also be a fracture that doesn’t show bruising on the surface of the skin.

A key sign of fracture is marked deformity of the injury site. The broken bone causes skin elevations that result in functional impotence. It is very difficult to move a fractured bone.

First aid for fractures and sprains

Once the injury has been determined as a sprain, the steps to follow to provide first aid at the scene would be:

On the other hand, if the injury is identified as a fracture, the first aid would be:

As you can see, there are many differences between fractures and sprains, even though they may present similar initial symptoms. It’s important to get an accurate diagnosis from a doctor, as treatment depends on it.

How to Treat Sprain Symptoms Naturally
The constant pain of sprains is always very annoying. Remember that, in addition to medications, rest is very important to alleviate sprain symptoms. Read more »
Link copied!
Interesting Articles
Anatomy and physiology
The Causes of Stained Teeth