Nine Reasons to Have a Daily Cucumber Drink

Cucumber drinks are low-calorie that can improve your health when included in a balanced diet. Why else should you drink them? 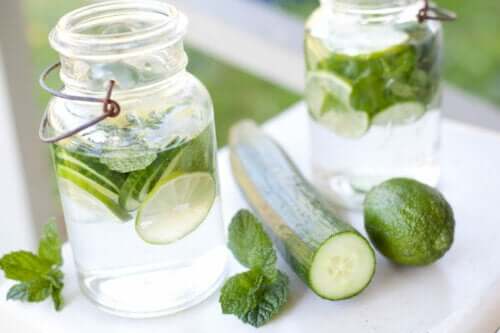 Have you heard about the benefits of having a daily cucumber drink? This fruit is healthy, low-calorie, and contributes to your physical and mental well-being when included in a balanced and healthy diet.

Generally, people use cucumbers in salads and soups, but you can also make drinks with them. One thing though, you must know it’s neither “healing,” “detoxifying” or “magical.” Thus, it’s simply a hydrating drink that’s low in calories that’s a great adjunct to your overall wellbeing.

How to make a cucumber drink

You can drink it daily basis, it’s easy to make and you can mix it with other ingredients such as lime and lemon to enjoy a stronger flavor. Let’s see how to make it.

You may not know it but making a cucumber drink takes just a few minutes and is really quick, simple, and economical.

You should also read The Truth about Cucumbers

Having a cucumber drink hydrates the body

One of the main reasons to have a cucumber drink every day is it’s a good hydrating alternative. As some may already know, a dehydrated body leads to the kind of problems that deteriorate the quality of life.

Furthermore, the American Academy of Family Physicians recommends consuming about 6 to 8 glasses of water a day. You can increase the amount if you do too a lot of physical activity, practice sports, or live in a hot climate.

Information published in NutritionValue states that cucumbers are mostly composed of water — approximately 96%. In addition, they make a modest contribution of minerals, such as potassium and sodium, which also intervene in the regulation of fluids in the body.

Nine reasons to have a daily cucumber drink

As we mentioned above, a cucumber drink isn’t magical and doesn’t cure diseases so it isn’t a treatment. However, this fruit is wholesome and good for your health when added to a well-balanced diet.

Having a daily cucumber drink is good for your wellbeing

Finally, it should be clear that a cucumber drink doesn’t have magical properties. However, it’s good to know that its regular intake is a way to ensure proper hydration. In addition, due to its modest contribution of nutrients, it’s a good addition to your diet for maintaining proper health.

Link copied!
Interesting Articles
Taking care of your body
All About Mosquito Bites

Tartar, also called dental calculus, is the calcification or hardening of bacterial plaque on the teeth. Its appearance is very…

Experts estimate that a healthy lifestyle could prevent half of all types of cancer. In this article, we'll show you…

Taking care of your body
What Is Hydro-Electrolytic Balance?

The hydro-electrolytic balance is a concept that aims to maintain a correct balance between hydration and mineral supply. A defect…