Cassava has been thoroughly studied like many other foods. For this reason, there's now evidence to support some of the medicinal properties of cassava. Below we'll tell you more about it. 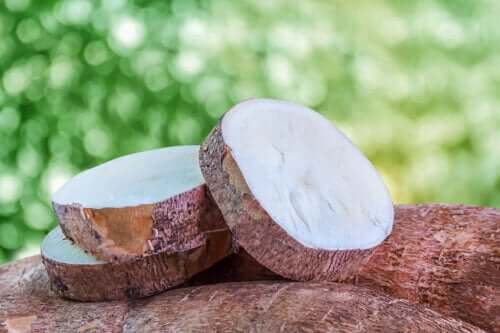 Cassava, also known as manioc, is an important staple of tropical countries. It’s present in most traditional recipes, as it is valued for its versatility and nutritional quality. What are the medicinal properties of cassava, though?

As with other foods, eating cassava is good for obtaining nutrients that are essential to health. Of course, this is as long as it’s included in a balanced diet. In today’s article, we’ll tell you more about it.

Just like rice and corn are basic foods in the Asian and American continents, yucca is the main ingredient of everyday dishes in Central and South America.

Cassava, manioc, or Manihot esculenta is a tuber, basically the underground part of the cassava bush. Many people also eat the leaves of the plant. It originated in the American continent but it’s currently grown in more than 80 tropical countries.

In addition, according to an article in Tropical Plant Biology, cassava is a major dietary component of more than 800 million people in the world. In general, it’s a great plant to grow because is drought resistant and doesn’t require too many fertilizers.

Most of the medicinal properties of cassava are due to its interesting nutritional profile. It, as detailed in a study published in Comprehensive Reviews in Food Science and Food Safety. 100 grams of boiled cassava root contains just 112 calories.

Of this, 98% of it is carbohydrates, and the rest proteins and fats. This same publication reveals that cassava is also a source of fiber, vitamins, and minerals. Specifically, the same portion of cassava contains:

Boiled cassava also contains minimal amounts of iron, vitamin C, and niacin, among other elements. Despite this, its nutritional profile is minimal in comparison to other root vegetables such as beets and sweet potatoes.

How to eat cassava

You must peel cassava before cooking. Also, you should always cook it before eating it because it’s toxic when raw.

We must clarify that by “medicinal properties” we’re not implying that cassava has any disease curing superpowers. While it does provide some health benefits when you add it to your diet this doesn’t mean that it can relieve ailments all by itself.

So, let’s assume these qualities of the vegetable as simple reasons to include it in a healthy and balanced diet. This way, they’ll surely contribute to our well-being.

Cassava is very easy to digest and a great source of fiber. According to a study published by the Journal of Food Science and Technology, fiber from food speeds up the passage of food through the digestive system. In addition, it adds volume to the poop, thus preventing problems such as constipation.

Cassava nutrients are allies in strengthening the immune system. Thus, including this food in your regular diet keeps infectious diseases at bay as well as allergies and other conditions that are due to weak defense mechanisms.

Among other properties, cassava contains saponins, which are “immunoadjuvants,” according to a study published in 2014.

It promotes strong and healthy bones

Cassava also contains calcium. This is why consuming it is also directly related to bone health. Calcium, as studies show, is crucial for strengthening bones and preventing bone density loss.

We also recommend Autoimmune Diseases: Which Foods to Eat and Avoid

Medicinal properties of cassava – things to keep in mind

Eating cassava in large amounts can lead to weight gain due to its high carbohydrate content; therefore, you must do so in moderation. In addition, you must always cook it because, as we said above, it’s toxic when raw.

Also, the evidence in regard to its medicinal properties is still limited. So, don’t use it as a remedy for treating health problems. Consume it only as part of your diet and in moderate portions.