8 Warning Signs Nails Give You Regarding Your Health

Your nails might be in rough shape because of your lifestyle, or might be sending you a message. Look for these warning signs your nails are giving you! 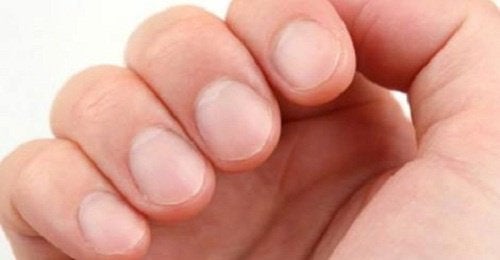 Men and women alike try their best to keep their nails looking clean and healthy. However, nails aren’t just there for looks, but can also let you know a lot about your health. They can even be the key to catching serious illnesses before it’s too late. There are a few warning signs nails can give you when it comes to other conditions you might have.

Make sure you are constantly looking at your nails to find any changes, and if you see any pay close attention because it could be a warning sign about some sort of health-related problem. Would you like to know about the different warning signs nails can give you?

Warning signs your nails could be sending about your health

Healthy nails are usually a pinkish colour with a little pinkish-white colour close to the base of the nail. When nails become paler or develop discoloured patches, these can be one of the warning signs in your nails pointing at other health issues you may not be aware of.

Even though thick nails are seemingly stronger, an excessive thickening of the nail is not normal at all. Thus, when nails have a claw-like appearance, are thick, or difficult to trim, it could be a warning sign of certain medical conditions.

Nails that seem to be brittle are usually a result of nail-biting or hitting your nail against something that causes it to break. However, this is not always the case, and it can sometimes be an indication of a health problem.

Concave nails, popularly known as “spoon nails”, are some of the most common warning signs your nails might be giving you. This type of nail is easily identifiable because instead of the normal outward curve nails usually grow in, your nail may grow with an inward curve. Some causes for spoon-shaped nails are:

However, it’s advisable you consult with your doctor so they can double check for any of these conditions.

The many layers of keratin that make up the nails give it its shiny appearance on the surface. Oftentimes, when the surface of the nail begins to flake off, it is because it has been exposed to rough activity.

Nails with holes in them

Holes in the nail can happen if something bumps up against it, or if you have the tendency to bite your nails. However, it can sometimes be a warning sign of a serious condition that shouldn’t be ignored. These are some common causes for this symptom:

As always, consult with your doctor to make sure what’s the cause for your holy nails.

White spots on the nails are a common problem when you bump or mistreat your nails. Nevertheless, they can be a sign of health problems. Besides bruises or hits taken by your nails, some of the causes for your white spots might be:

Your nails should have a smooth surface with no visible lines. If lines form “ridges” of sorts, it can indicate some sort of health issue. Here are some reasons for the ridges in your nails:

You might want to read: 9 reasons why your nails break

Your nails may be a better indicator of your health than you might think. Thus, if you notice some sort of change, the best thing for you to do is go see a doctor to find out why and rule out any serious health problems.

Homemade Remedies for Moisturized Nails
Learn about the best homemade remedies to moisturize your nails and make them look great without neglecting the skin around them. Continue reading below! Read more »
Link copied!
Interesting Articles
Did you know?
New Year's Traditions Around the World