8 Things About Your Period You Probably Don’t Know

Even while you have your period your ovaries are already preparing for the next cycle, so if you have unprotected sex, there is the possibility of you becoming pregnant 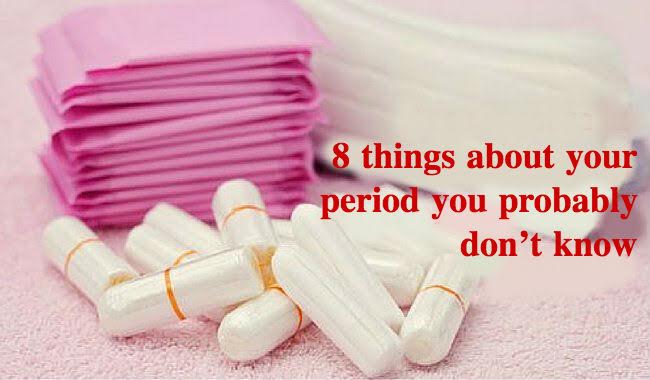 Most women know that every 28 days or so they’ll have their period. Cramping, having to use feminine products, and mood swings – among others – are some of the things you have to endure for between three to six days.

In spite of this, your period is a biological and hormonal process that depends on many aspects of your physical and emotional health.

Indeed, there are more than a few curious facts that many women might ignore but that could be occurring with your period every month.

Today we want to share eight of them with you. Don’t miss out!

1. What happens during your period

The menstrual cycle is designed to facilitate female reproduction. Around halfway through your cycle, ovulation occurs. This is the process by which one of your ovaries releases an egg, that may or may not become fertilized.

At the same time, your body increases its production of a hormone known as progesterone, which thickens the lining of your uterus and makes it ready for a fertilized egg to implant.

However, if fertilization didn’t occur during the month, your progesterone levels drop and your regular menstrual period occurs.

Hormonal contraceptives can cause changes in a woman’s menstrual cycle. Birth control pills, the ring, or implants tell your body that it doesn’t need to produce more progesterone, which makes the blood flow lighter when you have your period.

In fact it’s not uncommon for bleeding to be very light or not at all.

3. You can get pregnant during your period

This is something that every woman should know. Although the chances are slim, it’s been shown that there is the possibility of getting pregnant while you have your period.

During your period, your ovaries are preparing a new egg for the next cycle that won’t be released for approximately another 15 days. But not all women have the same cycle, and some may ovulate before they have finished their period.

That’s why having unprotected sexual intercourse during your period could potentially lead to a pregnancy.

This is especially true for women who have irregular periods.

4. A normal period consists of less than one cup of blood

Every woman is different, depending on her hormones and lifestyle. But it’s estimated that in general, women on average lose about 100 ml of blood, the equivalent of a small cup of coffee.

This amount is increased if you consider the endometrial lining and other vaginal fluids that are also released.

While it is extremely rare, it’s essential that all women remember to change their tampons or pads several times a day to prevent the growth of bacteria that causes toxic shock syndrome.

This condition is very serious and has been the cause of death for many women.

PMS is a real thing that around 90% of women will suffer from at some point in their lives.

It’s characterized by strong mood swings, the appearance of acne, and constant headaches. It also increases abdominal bloating and fatigue.

These symptoms typically occur a few days before or during your period. If you notice you’re suffering from them during other phases of your cycle, it could be a sign of another condition.

You want to know more? Read: 11 steps to combat bloating

7. Almost any illness can interfere with your period

Anything that affects your health can also interfere with your menstrual cycle. Cancer, heart disease, and thyroid disorders are some of the common culprits of these responses.

Other gynecological conditions can also be related with changes in your period. Nevertheless, it doesn’t mean that abnormal periods are always a sign of a serious illness.

Several studies have confirmed that stem cells, the cells that repair different types of tissues, are found in the blood you shed during your period.

It’s interesting, right? As women, it’s good to know these kinds of things that can help answer any question that comes up about your intimate health and your period. Share them!

5 Natural Home Remedies for a Heavy Period
%%excerpt%% A heavy period is something many women have to suffer from each month. Fortunately, there are some natural remedies that can help. Read more »
Link copied!
Interesting Articles
Illnesses
Causes, Treatments and Symptoms of Oliguria