Eating too much processed foods can cause inflammation and toxins to build up in our bodies. Avoiding them it crucial to keep chronic diseases from developing. 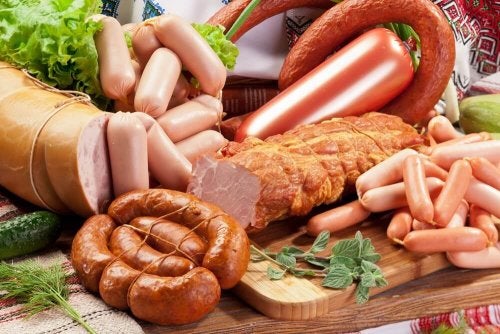 The dangers of processed food isn’t shocking news. Even though consumers have only recently started warnings about the dangers in past years, the problem started decades ago in the interests of food industries.

While finding healthy food products is possible, many of the products that invade supermarket shelves are full of harmful substances. Why is it so important to avoid them?

Though they might look tasty and versatile for diets, their production process involves conservatives and harmful chemical additives. In addition, many of them lack essential nutrients and contain too many calories.

What are the dangers of processed foods?

Processed foods are any kind of food product that has undergone an industrial process. By means of chemical processes, the flavors and textures of these foods are made to attract consumers.

The companies that make these products have sold them as “the best option” for fast and satisfying diets. However, behind all that, they hide the fact that artificial compounds and refined processes can have negative consequences for the body. What exactly are they?

Also read: 6 Foods that You Shouldn’t Include in Your Diet

There’s no doubt about where the interest of the food industry lies: making more and more money. To them, it doesn’t matter that they use a wide-range of chemical additives that produce an addictive effect, making consumers choose them regularly.

The components in organic foods satisfy hunger. On the other hand, processed foods stimulate the body to release dopamine, which is a substance that makes people feel satisfied even if they’re not getting the proper nutrients.

Obesity is one of the big problems of modern public health. Many cases are a result of genetics. However, the majority of the cases have something to do with dietary habits and consuming processed foods.

Processed foods are full of sugars, saturated fats and simple carbohydrates that make it more likely for the consumer to accumulate fat. Furthermore, they contain chemical products such as monosodium glutamate and corn syrup, which are both linked to being overweight and obesity.

3. They affect the body’s pH

One of the bigger dangers of processed foods is that they don’t follow the principles of food combinations. As a result, the body can’t use the nutrients that it receives, leading to blood acidification that leaves health at risk.

By causing an imbalance in the body’s pH, these foods raise increase the toxins in blood and leads to various inflammation-linked diseases. In addition, they impact metabolism as well and lead to weight gain.

The high levels of acids that come from these products tends to impact the activity of the body’s gut microorganisms. As a result, the probability of developing digestive conditions or infections increases.

5. Process foods cause depression and irritability

While organic foods help us feel good, processed foods negatively impact our mood. Their regular consumption is linked to depression, anxiety and irritability.

6. They raise the risk of chronic diseases

Encased meats and refined foods release inflammatory substances in the blood that could lead to chronic diseases. Given that they speed up the process of cellular deterioration, over time, processed foods could lead to conditions such as rheumatoid arthritis, osteoporosis or cancer.

The cardiovascular system can suffer serous consequences that the dangers of processed foods imply. Many people might not care to think twice about them, but these products are a cocktail of substances that are harmful for the heart and circulation.

The majority of refined products contain saturated fats and too much sodium, which cause cases of high blood pressure or hypercholesterolemia. Eating them regularly can lead to atherosclerosis or heart attacks.

The chemicals found in processed foods are toxic. Thanks to the body’s excretory organs, many of these toxins can be eliminated through sweat and urine.

However, these foods produce toxin build-ups in the body because they’re eaten on a daily basis. As a consequence, these particles deteriorate the body’s cells and speed up aging.

You should read: 7 Recommendations to Care for Aging Hands

What are the most common examples of processed foods?

As we’re already mentioned previously, stores are full of these kinds of products. Now that we know that they’re dangerous, being able to identify them is crucial to limit their consumption as much as possible. Below is a short list of the most common varieties:

Did you know about these dangers of processed foods? As you’ve learned, they’re very harmful for our body. Try to limit them as much as you can from your diet and opt for organic foods instead.

12 Worst Toxins in Processed Foods
We all know that processed foods are far from being the best food for us, but were you aware just how many toxins they contain? Read on and find out. Read more »
Link copied!
Interesting Articles
Did you know?
Why Do We Have Armpit Hair?