8 Types of Foods To Avoid with Colitis

Even though it's usually recommended to eat fiber to increase your digestion and get rid of waste, if you have colitis, it's actually better to avoid it, as it can increase swelling and discomfort. 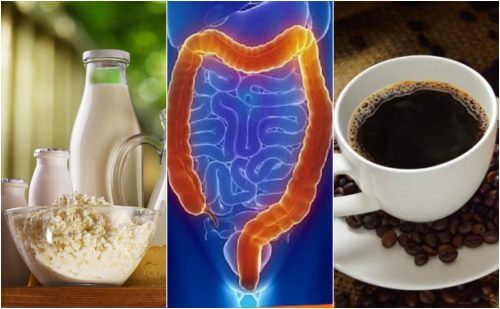 Colitis is a digestive disease that is caused by inflammation in the large intestine. This is usually due to food poisoning or a parasitic infection, according to this study carried out by Harvard University.

Many tend to confuse it with common cases of diarrhea, which is one of the main symptoms. However, in this case, it’s more severe, and it’s almost always accompanied with bloating, abdominal pain, and fever.

Also, unlike other digestive problems, it usually appears over and over and for a longer time. Because of this, it’s important to know more about this disease.

In addition, you should really know which foods can make your symptoms worse. In this article, we want to share eight of the main problem foods, so that you can start to reduce the amount you eat from now on. Take a look!

See also: 5 Digestive Disorders that Can Cause Weight Gain

Fried foods and foods with high levels of fatty materials can make symptoms of colitis worse. This is because they make digestion more difficult and increase inflammation. According to this study carried out by the University of Guadalajara in Mexico, eating too much fried and fast food may even be related to insulin resistance.

It has always been recommended that you should eat fiber to improve your digestion. However, colitis patients should avoid foods made from grains and whole seeds. Soluble fiber is the best option for those with colitis, as stated in this investigation carried out by the Federation of Crohn’s and Ulcerative Colitis Associations.

Patients diagnosed with this disease should avoid drinks with caffeine as much as they can. These include coffee and tea, as stated in this report by the Spanish Society of Internal Medicine. This substance increases the levels of inflammation in the colon and affects the process that is in charge of getting rid of waste.

Whole milk and dairy products are the number one enemy for any colitis patient. This isn’t only because of their high-fat content, but also because of their lactose content. This was confirmed in an investigation conducted by the San Carlos Hospital Clinic in Madrid.

It’s believe that sausages and cold cuts don’t only have high levels of fat, but also contain sodium and artificial additives, which increase intestinal irritation. Eating them on a regular basis could then cause digestive problems, and increase the presence of toxins in the colon.

However, although they’re not recommended for those suffering from colitis, there is no scientific evidence to support these beliefs.

Margarine and butter are definitely foods to take off the menu if you’ve been diagnosed with colitis.

Refined flours are inflammatory food that can make symptoms worse for patients who suffer from intestinal problems. This was stated in a study by the Arthritis Foundation, which has also linked this food with joint inflammation.

This kind of food has been put through several industrial processes. During these processes, it loses a lot of its properties and nutrients. As a result, it’s much harder to digest, and some people can develop allergic reactions to them, according to this statement from the Spanish Association for People with Food and Latex Allergies.

The most troublesome thing is they are present in many foods that you eat on a regular basis. Because of this, it’s difficult to avoid them completely.

Carbonated and alcoholic drinks are very irritating for people who suffer from colitis and digestive difficulties, as confirmed in the previously mentioned report from The Spanish Association of Internal Medicine.

In conclusion, there are digestive complications that can be caused by colitis. Because of this, it’s best to try to avoid all of these foods as much as possible.

While many people make them part of their daily diet, it’s wise to look for healthy alternatives to make it easier to control your condition.