Despite being one of the cancers with the highest mortality rates, early detection can increase life expectancy up to 95%. Keep reading to find out which signs of ovarian cancer you shouldn't ignore. 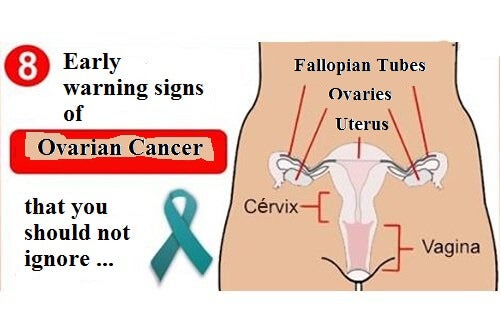 Ovarian cancer has been dubbed the “silent murderer”. This is because the signs of ovarian cancer may appear when the disease is already advanced and harder to treat. This type of cancer is the second most common gynecological cancer among women. Still, it has a higher mortality rate because doctors find it once it’s too late. Find out what you need to know about the early signs of ovarian cancer you shouldn’t ignore.

According to recent reports, only 50% of women who receive an ovarian cancer diagnosis survive up to 5 years. Indeed, this is because doctors detect it at an advanced stage. However, early detection increases life expectancy up to 95%.

Ovarian cancer can occur in women of any age, but the risk increases from age 50 and older. In addition, women over 65 are the most at risk. It’s important to learn about some of the symptoms of possible ovarian cancer. But first, remember to consult your doctor if you experience these red flags since they can also be related to other health problems.

This might interest you: 7 Ovarian Cancer Symptoms Every Women Should Know

These symptoms have been linked to ovarian cancer, but can also be signs of other health problems. Knowing about and recognizing them can be key to detecting the disease early and to receiving timely treatment.

Read more on: 11 Causes of Pain During Sexual Intercourse

Other symptoms to keep in mind

In conclusion, ovarian cancer is hard to detect since symptoms don’t usually appear in the early stages of the disease. Still, if you have some of the symptoms we’ve listed above, consult with a physician. They can help you diagnose it early through ultrasound, tomography (CT), magnetic resonance imaging (MRI), and a blood test called CA-125.

Skin Cancer Warning Signs and What to Do About Them
While prevention is the key to preventing skin cancer, there are some skin cancer warning signs that can help you get an early diagnosis. Read on! Read more »
Link copied!
Interesting Articles
Illnesses
What Are Autoinflammatory Diseases?