As well as containing vitamins and minerals, asparagus is a diuretic that is rich in fiber, helping to prevent and reduce fluid retention and constipation. 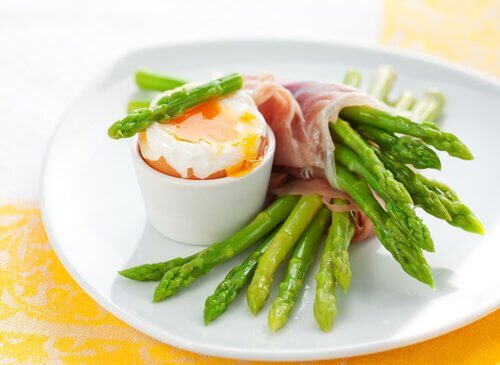 Delicious and versatile, there are so many benefits to eating asparagus. But do you know what these benefits are? The best time to eat asparagus is during the spring, when you can find both varieties (green and white) in grocery stores.

We’ll tell you everything you need to know about asparagus in this article.

It is the stem part of the plant called Aspargus Officinalis, which can measure up to a meter and a half in height. It belongs to the same family as leek, onion and chives, even though it might not look like or taste like it.

Green asparagus is grown in warm climates, with the biggest producers based in Italy, Germany and France. Although greenhouses and cool stores allow us to have vegetables all year long, the best time to eat asparagus is in the spring. In other months, you can eat them preserved.

A brief history of the asparagus

The asparagus plant is native to the Mediterranean region, close to the Tigris and Euphrates rivers. In Ancient Egypt and Ancient Greece, people would eat asparagus and use it as an offering to the gods. It became popular all over Europe thanks to the Romans, who favored it because of its medicinal properties.

With the downfall of the Roman Empire, people stopped consuming asparagus. However, in the 12th Century, it found fame once again for its use in gastronomy. In the 17th Century, asparagus became one of the most consumed foods among the bourgeois and the upper class.

Until the 19th century, the only type of asparagus that people knew was green asparagus. However, due to a change in the way people cultivated it (underground), white asparagus started to grow. The difference is due to how much sun the plant gets (the green color is due to chlorophyll).

What are the benefits of asparagus?

According to this article from The Spanish Nutrition Foundation, asparagus (especially green asparagus) is rich in vitamins. Asparagus has been popular since ancient times and has a wide variety of benefits. Find out what they are:

As it’s predominately made up of water, asparagus facilitates the removal of fluids.

Another one of the health benefits of asparagus is its ability to regulate intestinal transit due to the fiber it contains. This was confirmed in a study by the National University of Pusan, Korea.

Having a meal that includes asparagus can be much more efficient than any beauty treatment. This is because this green (or white) vegetable contains a lot of antioxidants that have the ability to neutralize the effects of free radicals, as shown in this study by the University of Conception in Chile.

Another benefit of asparagus is that it contains a good amount of folic acid. This nutrient not only improves the health of pregnant women and helps the fetus develop, but it’s also beneficial for the brain, as demonstrated in this study carried out by the University of Chile.

Its nutritional composition is made up of vitamins A, C, E and K. It also contains chromium, oligo-elements, fiber and folic acid.

6. It’s good for your bones

People over the age of 50 (especially women who are going through menopause) and children under the age of 5 should consume more asparagus than anyone else.

7. It helps you lose weight?

If you’re on a diet to lose weight then you should include asparagus in your meal plan.

Finally, the last of our health benefits of asparagus is that it nourishes the body with nutrients that help the immune system, according to this investigation carried out by the Hislop School of Biotechnology, India. It is therefore ideal for preventing colds, the flu or any other viral or bacterial illness.

As you can see, there are many benefits to eating asparagus. Don’t hesitate to include it in your meals, make the very most of it, and enjoy its earthy flavor.

Cream of Asparagus Soup: Two Recipes You’ll Love
If you're craving a rich cream of asparagus soup with a twist, here are two yummy recipes that reinvent this dish. Read on to learn how to make them! Read more »
Link copied!
Interesting Articles
Nutrition
Why You Eat When You’re Not Hungry