Breakups are hard and you may go through more of them than you hoped for, but many of them could be prevented if you could only avoid these things that destroy relationships. 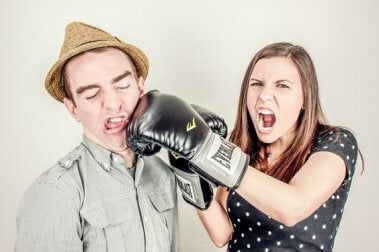 Meeting someone and starting a relationship is so wonderful and at first everything seems perfect. But as things progress, little things come to light: attitudes and actions that can destroy relationships.

In this transition period, difficulties may arise if you don’t really talk about things. Knowing what each other likes and dislikes, and making it clear from the start, is the best option.

Most couples fall into the fatal error of not saying anything, and things just get worse. You hide your annoyances to prevent an argument, but your partner may take that to mean that nothing is wrong. That’s why it’s such a good idea to find out what these things that destroy relationships are — so you can avoid them.

7 most common things that destroy relationships

While there are thousands of factors that could lead to a breakup, these are the most common. Keep them in mind so you don’t accidentally fall into them!

Types of Breakups That Shatter our Hearts

1. Caring about what others think

Allowing your family and friends to have too much input into the relationship could be a relationship-destroying mistake.

The first few times they offer an opinion, you may accept it out of respect. However, it could be causing damage under the surface, which could get serious over time.

Meanwhile, your friends may think they deserve input into your relationship as if they were a part of it. However, they are not.

Harsh, mocking criticism really hurts a person’s self-esteem. If you do it with love and tact, and if you have the lines of communication open, they’d surely be grateful for good advice.

However, if you give it without them asking for it — and with a condescending tone of voice — you’re falling into one of the things that destroy relationships.

The person who feels hurt will probably isolate themselves out of protection.

Some people — both men and women — want to control absolutely everything, including their relationships. Disproportionate jealousy, snooping in your cell phone, and controlling your schedule are things that nobody likes. They also often lead to lies.

Trust is essential, and not just with words.

Going about your day while your partner is overwhelmed with a problem will also destroy a relationship. Family and financial issues should be shared.

If you ignore their existence, your partner will have to bear the whole weight themselves, and anger will bottle up because you’re not helping. Then the time will come when the relationship breaks up, even if the initial cause is forgotten.

Take a look at this article, too:

It’s also harmful when one or both members of a marriage are uninterested in sex. At first, you may accept the excuses, but then come the arguments.

A key part of serious relationships is sexual intimacy. After all, it’s when you join together in all of your senses and forget the world outside. If there’s no sex but one person wants it, then they may leave or look for it elsewhere.

6. The little things are gone

At first, you’re attentive and never forget birthdays, anniversaries, and Valentine’s Day. They’re times of love and romantic dates. And when you get sick, your partner takes care of you or helps around the house so you can rest.

However, as the years go by, many couples forget these “little things.” The forgotten person feels forgotten and unloved, and they may express it. This leads to issues in many relationships.

7. Not taking care of yourself

There are some who stop taking care of themselves and their appearance once they have a partner. They gain a lot of weight, give up exercising, and forget that hair stylists exist. It’s normal to see them around the house in pajamas all day.

Well, these attitudes are things that destroy relationships because you turn into someone else. Where did the sharply dressed flirt with great hair go after the first dates?

People mature and change as they grow. Relationships should mature likewise. The best way to mature is to not forget the things that helped form the relationship to begin with.

Four Issues that May Affect Your Relationship and Drive You Apart
A lack of communication and not spending any alone time with your partner is one of the issues that may affect your relationship. Read more »
Link copied!
Interesting Articles
Sex
9 Factors that Can Decrease Sexual Desire