Although toenail fungus is not a highly contagious infection, it's possible to catch it by sharing shoes, socks or personal hygiene items such as nail clippers. 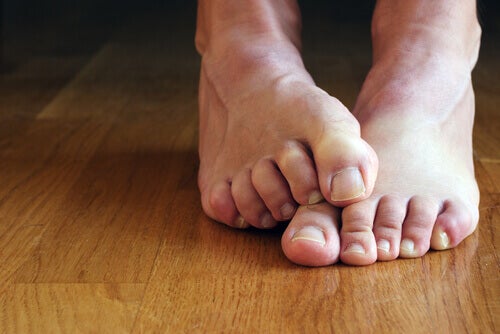 Toenail fungus infection, or onychomycosis, is very common. This disease involves a series of changes in nails, including the appearance of cracks, a yellow color and an uncomfortable itchy feeling.

Toenail fungus is usually the result of a lowered immune response. However, the following can also cause it:

The presence of a toenail fungus infection doesn’t mean there is a serious health problem. However, if you have it, you must treat it. This isn’t only for aesthetic reasons but also because of the pain and other complications it can cause.

In addition, it’s good to know some important facts about the condition in order to take preventative measures.

Stay tuned to learn 7 things you need to know about toenail fungus.

Dermatophytes are the fungal species responsible for most cases of toenail fungus infection. They usually thrive in warm, moist environments.

Many people are embarrassed that they have it, but it’s actually a very common infection. Believe it or not, more than half of the population have had it at least once in their life.

Your susceptibility to toenail fungus increases with age. Because it’s hard to detect at first, many people have it without even knowing.

Although toenail fungus isn’t a highly contagious infection, it’s very important to keep in mind that it can be transmitted in certain situations.

There’s no high risk associated with just being near someone with the fungus. However, there’s a high probability of developing it by sharing socks, shoes and nail clippers.

In addition, microorganisms can remain on shower surfaces and bathroom floors. That’s why you should be careful to wear shower shoes. It’s especially important to do so in public showers.

3. Know the Healthy Habits to Prevent It

It’s a fact that certain healthy habits can help lower the risk of developing toenail fungus.

Besides not sharing personal hygiene items, you should keep your toenails clean, dry and short.

After getting out of the shower and before putting on socks or shoes, you should dry your feet with an absorbent towel.

Likewise, socks should be made of breathable fabrics that help avoid moisture retention.

At the same time, it’s essential to have a balanced diet, rich in nutrients that strengthen your immune system.

4. Not All Treatments Are Effective

Believe it or not, natural remedies can be quite useful to reduce and control toenail fungus.

However, they aren’t effective in all cases since the fungus sometimes manages to survive the treatments and keep spreading.

If that’s the case, it’s best to see a doctor to get both topical and oral pharmacological treatments.

These kinds of options tend to give better results, though it can be months before they take effect.

Read this article too: The Symptoms of Foot Fungus: Do you Have Them?

5. An Excess of Moisture Increases Your Risk

Washing your feet excessively or keeping them in contact with water for long periods of time is another factor that increases the risk of contracting toenail fungus.

This is because an excess of moisture weakens cuticles, which are the protective layer of your toenails, thus allowing the growth of microorganisms.

6. Its Appearance Relates to Athlete’s Foot

The majority of patients with toenail fungus also suffer from or have suffered from the condition known as athlete’s foot.

This is another fungal infection that’s characterized by a collection of skin problems on the feet.

It’s quite common among athletes and swimmers since both are exposed to environments that facilitate the growth of fungi.

Check out this article: Two Ingredients That Can Inhibit Nail Fungus Growth and Spreading

7. Toenail Fungus May Be Warning You of Other Conditions

The sudden appearance of toenail fungus can be a sign of chronic health problems such as circulatory difficulties and diabetes or of a vulnerable immune system.

There’s even a higher risk of contracting it if you’ve had other skin issues such as psoriasis or dermatitis.

Keep this in mind if you have recurring problems with toenail fungus.

Now that you know more about this type of fungus, try to examine your toenails regularly and improve their care to prevent infection.

Seven Home Remedies to Remove Foot Calluses
To optimize the effects of the remedies for foot calluses, you have to remember to moisturize the affected area and use a pumice stone to remove dead skin. Read more »
Link copied!
Interesting Articles
Illnesses
Can Celiac Disease Cause Infertility?