7 Serious Consequences of Not Getting Enough Sleep

Sleeping is an incredibly important issue to maintain good health. If you're constantly lacking sleep, your body will resent it tremendously. 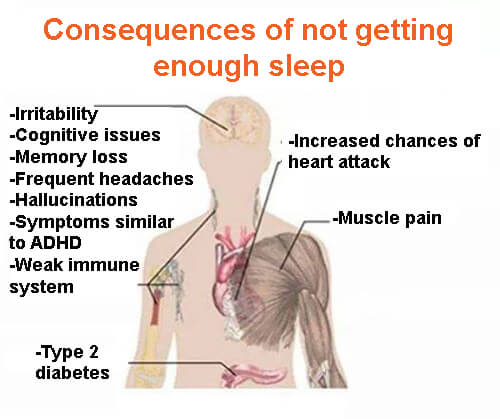 Most of us, at some point or another in our lives, have experienced the symptoms of not getting enough sleep. Sleeping poorly or sleeping less hours than you need can make it hard to concentrate. It can also make you feel clumsy, drowsy and physically tired. Plus, the next morning, the fact that you had a hard night is written all over your face.

However, most people don’t know that not sleeping enough can bring serious long-term consequences for your health.

According to the WHO, the average person should get between 7 and 8 hours of sleep per night. This will help them to maintain good physical, emotional and mental health.

Nonetheless, work, lifestyle and technology have led us to decrease the number of hours we sleep per night. More and more people report experiencing a poor quality of sleep.

A recent study from the University of Texas found that people who do not get the minimum recommended number of hours of sleep per night, after 7 consecutive nights, presented genetic alternations that could lead to serious health problems; this includes issues such as obesity, heart disease, memory loss, and others.

If you’re someone who sleeps 6 hours or less per night, you must be aware of the serious risks involved.

Not getting enough sleep can increase the risk of strokes

A study by the Mayo Clinic determined that people who don’t sleep well experience an increased stroke risk. Adults who sleep for 6 hours or less per night are up to 4 times more likely to present the symptoms of a stroke.

People who find sleeping at night hard or who do it for less than 6 hours per night tend to have a larger appetite and experience more high-calorie food cravings. The deprivation causes them to suffer from a number of hormonal changes that affect their appetite.

Additional, sleeping poorly can have long-term effects, particularly obesity. According to a number of studies, a lack of proper sleep provokes significant changes in the body’s levels of ghrelin and leptin; these hormones are responsible for regulating appetite.

6 Types of Obesity and their Causes

A research study by the Center for Disease Control found that low-quality sleep is related to an increased risk of chronic diseases such as type II diabetes. It also found that people who experience poor sleep are less sensitive to insulin.

It’s no secret that a poor night’s sleep can leave you feeling more forgetful and less concentrated. What most people don’t know is that they can develop serious cognitive problems as a result of this.

Even going one night without sleeping every now and then can cause brain tissue loss. This happens because the amount of blood in our brain molecules increases, thus causing brain damage. A study performed by the University of California found that a lack of sleep leads to “brain damage.”

Increased risk of catching a cold

Sleeping for less than the required number of hours weakens your immune system, which makes you more likely to catch a cold or get the flu. These results come from a study carried out by Carnegie Mellon University.

When you don’t sleep enough, your body produces chemical substances and hormones that can cause heart diseases. This conclusion comes from a study published in the European Heart Journal.

They claim that people who sleep for less than 6 hours per night are up to 48% more likely to suffer from heart disease.

On the other hand, a study published by Harvard Health Publications says that not sleeping enough is associated with high blood pressure, clogged arteries and heart failure.

One study by the American Cancer Study found that not sleeping enough could be related to a risk of bowel or breast cancer.

The study was performed with 1,240 people; researchers found that people who slept for less than 6 hours per night were up to twice as likely to experience bowel polyps. In the long term, the polyps can become malignant.

5 Tricks to Sleep Better
If you use these tricks to sleep better, you're more likely to get a better night's sleep and you wake up with more energy. Read more »