Cilantro contains properties that can benefit our bodies in an effective and completely natural way. 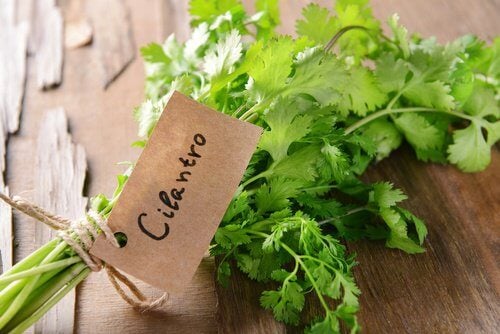 Have you ever heard about the many benefits of cilantro? Also known as Chinese parsley, it is a plant with straight stems and green leaves. All of its parts are edible and therefore, it was already widely used by the ancient Egyptians. However, its origin is uncertain.

This plant is considered to be native to the regions of north Africa and southern Europe. In nature, it can be found white flowers when summer arrives. It has a unique citrus scent in particular.

The benefits of coriander can be gleaned from the richness of its nutrients. The most outstanding are the following:

All these characteristics make cilantro a very powerful plant: stimulating, antispasmodic, diuretic, bactericidal, flavoring. Ideal for fighting diseases such as diabetes,  salmonella, and many other infections caused by bacteria.

It is not only used to flavor dishes or to give them a decorative touch. It is also used in digestive drinks, cocktails with liquor and even in perfumes.

One of the most significant benefits of cilantro is that it is capable of combating high cholesterol levels since it contains polyphenolic antioxidant flavonoids such as quercetin, kaempferol, ramnetin and epinephrine. Not only can these acids markedly reduce the accumulation of cholesterol in the inner walls of the arteries, also:

Visit this article:
Healthy Juices That Reduce Cholesterol and Triglycerides

The properties found in cilantro, especially fresh leaves and stems, help control any type of diabetes, and this is because this plant helps stimulate the pancreas, which ends up causing:

So, among other wonderful benefits, it is a powerful diuretic that allows for:

All of these benefits notably favor rapid and effective weightloss in people who eat cilantro frequently.

Basically,  salmonella is a infection that produces the set of bacteria that are acquired by the consumption of raw or unwashed foods. However, it can also be transmitted by pets, especially reptiles such as snakes, turtles and lizards.

However, this plant contains antibiotic properties capable of easily combating this condition. It is able to break the bacterium’s membrane of salmonellosis, which interrupts its growth, and, as a result, it weakens and dies.

For this reason, many people caring for a patient with salmonella choose to prepare broths or soups with cilantro. Just make sure the leaves are fresh and well washed.

Like mint and peppermint, cilantro is able to combat bad breath (halitosis). Also, it aids other problems in the mouth such as: canker sores, ulcers and sores. But, how does it do this? First, its antibacterial properties help eliminate the agents that produce uncomfortable conditions.

Another of the benefits of cilantro is that it is a powerful anti-inflammatory. This is because it is a plant rich in phytonutrients and antioxidants that help fight conditions such as rheumatoid arthritis, as it quickly and naturally relieves inflammation in the joints.

Cilantro has antibacterial properties. Additionally, it has a high content of vitamin A and C. So, the benefits of cilantro include expectorant properties. Basically, it’s ideal for combating colds and the flu.

One of the countries where cilantro is most commonly used is Venezuela. For Venezuelans, cilantro is an essential ingredient in their cuisine and their herbalists.

5 Ways to Use Vitamin E Capsules on Your Skin
Vitamin E capsules are easy to find in almost any pharmacy or beauty supply store. Not only are they inexpensive, but they can be a great addition to your skincare regimen.  Read more »
Link copied!
Interesting Articles
Did you know?
Vegan Meat Substitutes: What Are the Best Options?