In many cases the victim of psychological abuse has an elevated feeling of guilt that prevents her from leaving the relationship and can even lead to depression. 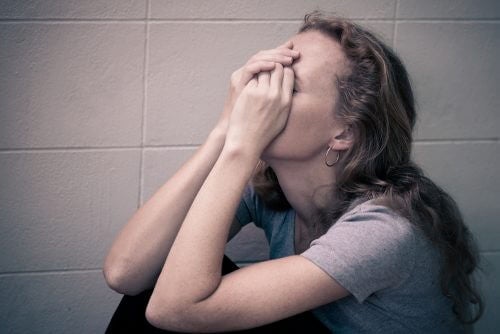 Psychological abuse is undoubtedly one of the most cruel. This type of violence causes the victim to doubt whether or not she is really being mistreated.

The worst thing is that, unless there is also physical aggression, one is not aware of the seriousness of the problem.

Read: Subtle Forms of Abuse to Ban from Your Life

In addition to this form of abuse being invisible, so are its consequences.

They are not perceived by the naked eye, but the abused person suffers them and carries them on her back even long after she has left a situation of violence.

The consequences of psychological abuse

1. The constant feeling that you’re worth nothing

Low self-esteem can be one of the triggers of this type of abuse. A person with high self-esteem would never allow it. However, underestimating ourselves is much more common than it seems.

What’s more, being in a violent situation can make it worse, so that the feeling that we are worthless is accentuated to such an extent that we are not able to raise our heads.

Asking for help and surrounding ourselves with good people who love us will be very important.

2. The encounter with loneliness

In most cases of psychological abuse, the abuser increasingly isolates his victim, to the point that she moves away from her friends and even from her family.

What the aggressor wants is for his partner to not have any support so that she does not try to break off the relationship.

In most cases, he even creates a derogatory image of the victim, so that nobody suspects and they distance themselves of their own volition.

3. Confronting the feeling of guilt

One of the strongest cards with which a psychological abuser can play is that of guilt. The victim at all times believes that it is she who has acted wrong and that’s why the other party responds with insults, verbal abuse, etc.

This guilt arises from the low self-esteem that we discussed at the beginning, and it is very difficult to eliminate, unless there is some work involved.

4. Depression will be around every corner

Depression is one of the evils of our time. However, it is also something that most people who have suffered abuse will encounter.

Depending on how deep it is, it can continue until the victim has suicidal ideas.

Guilt, believing that she deserves everything that happens to her, and loneliness will cause her to believe that the only way out is to end her life.

5. The difficulty in expressing feelings

One of the biggest consequences for people who have suffered psychological abuse is that they have serious problems with being able to express their emotions. It is what is called “emotional silence”.

Read: Learn How to Identify a Child Abuser

They have been swallowing everything they have experienced emotionally for so long because they felt guilty and believed they deserved it.

In this way, they have tried to dull their emotions in order to survive. However, this leads to the previous point, depression.

This is one of the problems that any victim of abuse will have: insomnia. All this because of the anxiety and stress that the situation has caused them.

On many occasions, dreams will turn into nightmares, which prevents the possibility of enjoying a peaceful, calm and restful sleep.

It is normal that people who have gone through some type of abuse resort to certain sleeping pills that allow them to get some manner of rest.

7. Problems relating to others

Like it would not be otherwise, people who have suffered psychological abuse will have a strong tendency to distrust others, in case the situation occurs again.

For that reason, and also due to their emotional silence, they end up not being able to have healthy relationships or to establish emotional links with other people.

Before you leave do not miss: Wounds that Never Heal: The Neuropsychology of Abused Women

Psychological abuse is silent. It is not seen. It hides behind a seemingly innocent look or word.

However, the deep wounds left on someone can destroy her life forever. Because the invisible blows are always the most painful and the hardest to heal.

5 Consequences of Emotional Abuse that Shouldn’t Be Overlooked
Emotional abuse is a type of violence that affects the stability of the victim, making him or her feel intimidated, guilty and even completely worthless. Read more »
Link copied!
Interesting Articles
Conflicts
The Fear of Abandonment in Romantic Relationships