Since ovarian cancer doesn't present specific symptoms in the first phases of the disease, it is important to be aware of the possible risk factors and go to a gynecologist. Learn about them in this article. 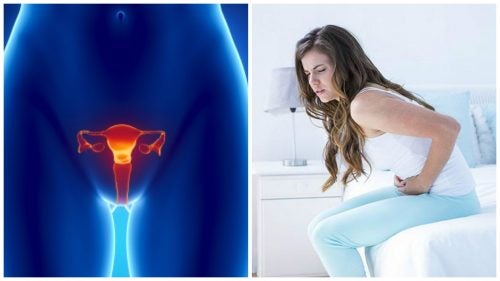 Ovarian cancer is a chronic and deadly disease that takes place when cells of this organ grow out of control. Every year, thousands of women receive this diagnosis. Even though it is treatable, it is the eighth cause of death among women in the world. That’s why we’ve compiled 7 important facts about ovarian cancer that everyone should know.

The problem for women as well as for the medical personnel is that ovarian cancer is unfortunately difficult to detect in its initial stages. Because of this, only some women receive timely treatment. Also, few women are informed with respect to the development and risk factors, therefore ignoring that there could be a high probability of contracting it.

1. The symptoms of ovarian cancer

Ovarian cancer is difficult to diagnose because of the lack of symptoms in the initial phases of development. Nevertheless, while it’s developing, there are some signs that you should pay attention to.

Some of the most significant ones are:

2. The risk factors of ovarian cancer

The major risk factor for ovarian cancer is heredity. All indications point to the specific mutation of some genes that, with time, cause the development of the abnormal growth of cells.

However, not all cases are caused by genetics. In fact, some can be associated with certain habits and external agents.

The risk of this disease increases in the following cases:

3. It is a cancer that can affect any woman

Although the continual exposure to the risk factors means there is danger of developing this illness for certain people,  all women are exposed to the development in any of the phases of life to a certain extent.

Hormonal changes during menopause increase the risk, but it can even occur in younger women due to other causes. Each year,  140,000 women die from this disease, and 250,000 new cases are diagnosed in the entire world.

Regular medical exams, as in the practice of health habits, are key to finding this disease as soon as possible.

Because of  the way in which it develops in the body, ovarian cancer has been labeled a “silent killer.” Unfortunately, there are very few signs to alert women in the initial stage of the tumor, which prevents suspicions.

A great percentage of cases are discovered when cells have invaded the system and have already extended to other parts of the body.

Forty-six percent of women live for at least 5 years after the initial diagnosis.  This survival rate varies in accordance with the grade of  development of the tumor and with the age of the patient when evaluated.

6. Early detection is the key to successful treatment

Timely detection is key to an effective treatment that is less aggressive.

When successful in diagnosing in the early phase, patients have a 90% chance of overcoming the disease. Because of this, it’s fundamental to take into account the possible symptoms and, before suspecting anything, see a doctor or gynecologist.

7. A pap smear doesn’t detect it

Erroneously, most women believe that they can detect ovarian cancer by way of a pap smear test.  Even though it is advisable to do so, this doesn’t function as a method to find abnormalities in the reproductive system.

Pap tests detect precancerous changes in the cervix. This should not be confused with detection of ovarian cancer. The latter should be detected with a pelvic exam and blood tests.

Considering that all of us women are at risk of this cancer, it’s a good idea to pay attention to this facts about ovarian cancer and consult with your doctor as soon as there’s any suspicion.

The sooner you have the important exams, the better is the possibility of detection before it is too late.

The Side Effects of Ovarian Cancer
Ovarian cancer is caused by the uncontrolled growth of cells in the ovaries. This type of cancer can involve the formation of tumors in the area and can also spread to other parts of the body. Read more »

Link copied!
Interesting Articles
Anatomy and physiology
What You Should Know About The Menstrual Cup