In addition to being rich in vitamins, minerals, and antioxidants, chia seeds are packed with energy, they’re satisfying, and they can help you lose weight. 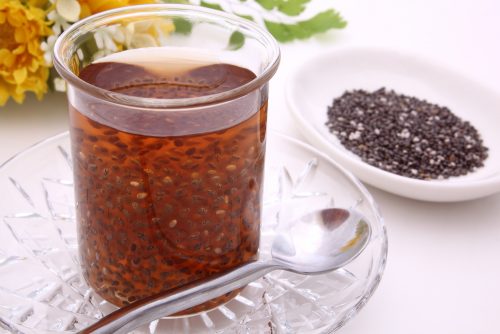 These small, dark, gluten-free, fiber and anti-oxidant rich seeds are all the rage. And with good reason! Chia seeds are great for anyone and everyone, from celebrities and athletes to children.

The word chía is of Mayan origin, and means “strength”. For thousands of years, these seeds have been a dietary staple in Central American countries. Over time, they have gradually been incorporated into all kinds of different cuisine. This is because chia seeds are packed with vitamins, omega-3 fatty acids, and minerals.

Although chia seeds were originally part of the Mayan and Aztec diets, they’ve now expanded throughout the world and are included in all different kinds of recipes, both savory and sweet: fruit smoothies, desserts, breads, salads etc. Their light flavor means they won’t alter the taste of your food, but they can give it a different, slightly crunchy texture.

According to the American Society of Nutrition, this super food contains up to 5 times as much calcium as milk, making them an ideal dietary substitute for vegans and those who are lactose intolerant. Chia seeds also:

The benefits of chia seeds

According to a study by the National Polytechnic Institute of Mexico, chia seeds contain properties which can significantly help to satiate hunger. As such, it’s good to add (at least) a teaspoon of chia seeds to your snacks to stop you from resorting to other, high-calorie options when you get hungry between meals.

When they come into contact with liquid, chia seeds swell up to 10 times their original size in the stomach, helping you to feel full. Of course, by helping to satiate your appetite, they can also promote weight-loss, or help you to maintain a healthy weight.

Are you the kind of person who doesn’t usually drink a lot of fluids during the day? Perhaps you forget or you don’t like to drink water. In this case, it is believed that increasing your intake of water, and supplementing it with chia seeds can promote hydration. However, there are no studies confirming this theory.

The omega-3 fatty acids in chia seeds are anti-inflammatory, as shown by this study carried out by the Department of Medicine at the University of Chile. As such, they’re a good option if you suffer from joint pain or if you’re susceptible to injuries in particular areas, such as the knees. According to an investigation by the Adventist University of Plata in Argentina, they’re also good for alleviating discomfort caused by arthritis and osteoarthritis.

Living in cities can cause plenty of health problems. In addition to stress, toxins and pollution are important factors to take into account. If you add that to tobacco smoke and UVA rays, the consequences can be very serious.

It is believed that chia seeds are able to help protect you from these toxins. However, there is insufficient scientific evidence to support this claim.

Have you been feeling very tired lately, with no strength or difficulty concentrating? If so, it’s time you consider adding chia seeds to your diet. They’ll help you become more active from the minute you wake up in the morning.

Because they contain more protein and potassium than most fruits and vegetables, they might give you that dose of energy that you’re missing. Ideal for Monday mornings!

Another advantage of consuming chia seeds is related to energy. When you work out and want to build more muscle, sometimes you might resort to supplements that aren’t good for your health, or may have negative side effects.

An excellent natural replacement for these supplements are chia seeds, as it’s believed that they increase muscle mass. However, this study, published in the Spanish journal Nutrición Hospitalaria, refutes this fact, believing there is a lack of evidence for such a claim.

To enjoy all the benefits of chia seeds, The Food and Nutrition Board of the National Institute of Medicine, recommends the following daily amounts:

If you want to incorporate them into your meals, we would recommend soaking them in water for at least half an hour beforehand. This will help to strengthen their natural properties, and will produce chia “milk”, which can be used to enrich other meals and drinks.

To make the chia “milk” add one spoonful of seeds to one glass of water. Once soaked, strain the mixture and drink immediately. As the seeds are generally small in size, it’s not always necessary to strain it – it all depends on personal taste. Give it a try!

How to Make Light Chickpea Hummus
Once you try this recipe out, you'll get hooked by its taste. Chickpea hummus is super tasty. Read on to learn how to make this recipe at home! Read more »
Link copied!
Interesting Articles
Garden and outdoor spaces
Lettuce Varieties and How to Grow Them

There are many lettuce varieties you can grow in your garden and they come in different sizes, shapes, and flavors.…

It's true that there may be carcinogenic compounds in certain foods. However, you should be careful about how you interpret the…

There’s a lot of talk lately about using natural and organic skin care products. Some people choose them because they have sensitive skin and need to avoid products and creams…

Today, we're going to help you discover some alternatives to the foods that you're used to. Let's have a look…

Everyone around the world eats oranges. However, while many people don't know this, orange peels are also sources of a wide…

Until recently, sea salt was seen by many consumers as a healthy alternative to traditional table salt. In fact, it…