6 Things You Should Know About Cradle Cap

Cradle cap isn't an allergy, nor is it due to a lack of hygiene. It's an aesthetic problem that, with proper care, you can keep under control until it disappears. 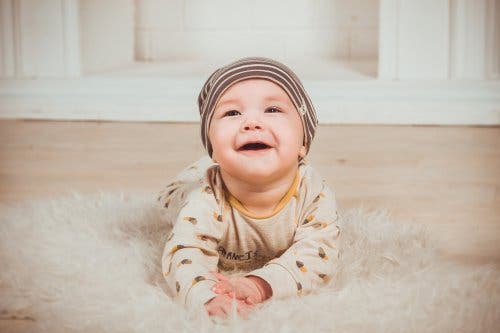 Cradle cap, or infantile seborrheic dermatitis, is relatively common in children up to three years of age, and usually goes away on its own. However, it’s normal for parents to be concerned when it appears.

That’s why, in this article, we’ll answer your questions related to this condition.

When we say “cradle cap”, we’re referring to a type of seborrheic dermatitis that occurs mainly in infants. It’s characterized by the appearance of crusts or thick yellowish scales in the scalp area. However, it can appear on other parts of the body too.

While some babies experience it in very small areas, in others it can appear on their whole head, and even on their eyebrows or eyelashes.

Regarding its causes, the truth is that researchers are still studying many of them. However, researchers believe that it may be caused by excessive fat production by the sebaceous glands. Also, since seborrhea mainly affects infants and adolescents, hormones might play an important role.

In any case, there are also other factors that can increase the probability of developing this condition. Among them, we should note extreme climates, oily skin, stress, weakened immune system, etc.

Below we’ll tell you 4 things you should know about cradle cap. We’ll answer questions that parents normally ask about this condition. That way, you’ll better understand it and you’ll be able to give your child proper care.

Does it itch or hurt?

Although it looks like it might itch or hurt, the truth is that cradle cap doesn’t cause any of these sensations in the baby. If it does feel irritation, it may be due to an infection, but not from seborrheic dermatitis itself.

In fact, it’s just an aesthetic problem that, in most cases, will disappear on its own after a while.

Is cradle cap an allergy?

Traditionally, myths and rumors have linked the appearance of cradle cap to certain food allergies, especially milk. However, this is just a myth.

As we explained before, infant seborrheic dermatitis is not related to allergic reactions, but to excessive sebum production by the sebaceous glands.

We recommend that you read: The 9 Most Common Allergies in Kids

No, cradle cap isn’t contagious. It’s not an infection of any kind, nor is it caused by bacteria or viruses, so it can’t be passed from one person to another.

Also, even though in most cases it usually disappears after a few months, some children continue showing symptoms until they are 2 or 3 years old. Additionally, in some cases, it may come back suddenly after it’s gone.

Is it due to lack of hygiene?

As we mentioned above, researchers don’t know the exact causes of cradle cap. However, it’s likely to be due to the excessive production of fat or sebum by the body. Therefore, it isn’t caused by a lack of hygiene.

On the other hand, once it appears, it’s important to take certain measures in order to avoid infection. For this reason, you can put gloves on the little one if they tend to touch themselves, keep their nails clean and use a comb with clean bristles.

We recommend you read: 7 Home Remedies to Fight Dandruff and Seborrhea

How do you treat cradle cap?

In most cases, you don’t need a specific treatment. However, you can apply olive or almond oil with a gentle massage in the area of ​​the scales to help eliminate them. Also, in some cases, you might need to leave the oil on them for a while to soften them.

In any case, you should never remove the scales by scratching them or with combs. It’s better to let the oils soften them and let them gradually disappear on their own.

Should I go to the doctor?

It’s always important to get a pediatrician’s advice when it comes to the health of your baby. Therefore, if your baby has cradle cap, you should mention that to the doctor so that he can make sure it’s that condition and not something else.

Additionally, your doctor can tell you about specific baby shampoos or what oils to use.

In any case, you should go to your doctor if:

As you have seen, infant seborrheic dermatitis is not a serious condition. A little home care is all you need and sooner or later it will go away. However, you should mention it to your pediatrician so that, in addition to ruling out other problems, they can tell you how best to treat it.

The Differences between Atopic and Seborrheic Dermatitis
Atopic and seborrheic dermatitis cause skin itching and irritation. In addition, newborns can suffer from both conditions. Read on! Read more »
Link copied!
Interesting Articles
Babies
Description and Characteristics of Colostrum