6 Things Your Fear Doesn't Want You to Know

Are not you tired of fighting fear? Does it seem like you'll never defeat it? The reality is that you can never win the battle against fear, but you can train yourself to fight it. 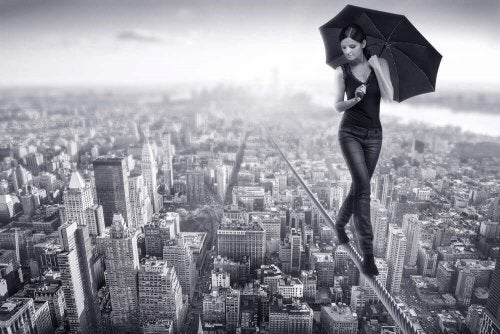 Do you feel tired of fighting your fear? Does it seem like you’ll never defeat it? The reality is that you’ll never win the battle against fear, but you can certainly train yourself to fight it.

You surely know several “methods” that help to overcome this feeling but no matter how often you defeat it, it always comes back for more.

This doesn’t just happen to you. In reality, fear is part of us and allows us to be safe in dangerous situations.

The problem is that over time this feeling can become normal in your life and can take control of your free will.

Whenever fear starts to take a hold of you, remember this. Then, work on them to reduce their effects.

The first thing that fear doesn’t want you to know is that it constantly lies and makes you feel miserable with every thought you have.

Fear is a very powerful emotion. Physiologically, it is one of the most useful defense mechanisms that human beings have. However, you must prevent it from distorting your reality.

Although you can’t get rid of it, it’s crucial to learn to keep fear under control to prevent it from determining how you act.

Happiness is Found in Reality, not Dreams

Another thing that fear doesn’t want you to know is that, regardless of your current situation or the difficulties you think they may entail, you can do what you set out to do.

Many people let themselves get controlled by fear and pay attention to all the negative messages that their mind sends them.

Most of the times, achieving big goals require a lot of time and effort. However, this is what makes it so special and motivates you to achieve results. And more importantly, you can learn a lot of life lessons in the process.

3. It’s never too late to change

Another thing that fear doesn’t want you to know is that neither age nor any other circumstance is an obstacle for change. In order for a chance to turn into a reality, you have to make it happen.

If there’s truly something going wrong in your life or if there’s something you want to do, create an action plan. You already have the goal. Now, take the necessary steps to make it a reality.

4. No one is more qualified to decide things in your life than you


One factor that is often very frightening is the opinion of others. This is because many people seem to comment on other peoples’ lives either to criticize or “help” them.

However, you’re the only one who has the right to decide what changes in your life.

Fear of criticism can make you become trapped in situations you don’t like or in a job you hate.

Perhaps you think that this is how you’ll be recognized by others, but this isn’t necessarily true.

In the end, there’ll always be someone talking about you, because this is a normal part of human nature. And this is OK because you can’t always get along well with everyone.

What you can do is live according to your hopes and dreams. It’s very likely that you’ll continue to be criticized, but you’ll certainly be happier.

5. Your past mistakes don’t define your future


The fifth thing that fear doesn’t want you to know is that the mistakes you’ve made don’t have to define how your future will be. We all make mistakes and we all carry a burden on our shoulders when we think of things we shouldn’t have done.

This is natural because life is about trying new things and making decisions. When you do these two things, you’re always bound to make a mistake.

Now, those mistakes can be a great help in finding the best path to your goals. Don’t be one of those people who stop trying and then doesn’t progress because they made a mistake.

Instead, use your mistakes to see which path you shouldn’t take or to learn a lesson.

Forgive and Let Go of the Past

6. The only thing that gets in your way is not fear, it’s you

Do you think that fear is what paralyzes you? The truth is that this isn’t the case. It’s true that fear can cause uncertainty and doubts, but the one who decides to stay frozen is you.

Whenever fear appears, you have two options:

When you stop seeing fear as a great obstacle in your life, you take full responsibility for yourself. Try to do it as soon as possible.

You’ll see that, even though fear causes uncertainty, being responsible for your actions is very rewarding.

Can You Overcome Sadness with Natural Foods?
Did you know that you can overcome sadness naturally by means of diet and some natural remedies such as Bach flowers or essential oils? Discover how to feel full of joy, energy and optimism again without having to turn to medication.  Read more »
Link copied!
Interesting Articles
Healthy habits
How to Avoid Stress and Discomfort During a Flight