6 Reheated Foods that Can Make You Sick!

Reheating food is a good way to save money and avoid waste. However, certain reheated foods can actually harm your health. 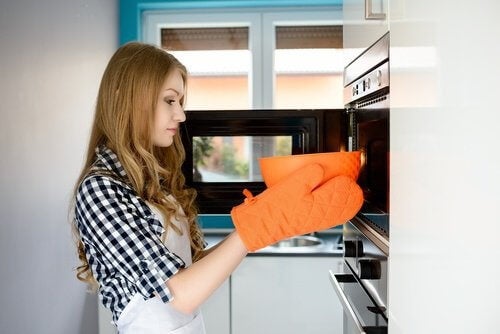 Reheated foods are popular for people in today’s fast-paced society. Many people choose them because of the convenience or to reduce food waste.

While it’s a practice that many have practiced for years worldwide. Some experts have recently discovered that it may be harmful to your health in certain cases.

The European Food Information Council warned that reheated foods that haven’t been properly cooked might be seriously bad for you.

How can reheated foods be bad for your health?

This is because certain strains of bacteria grow exponentially when exposed to environments with temperatures ranging between 40°-150°F.

This increases your risk for contracting a food-borne illness or other digestive problem like distension, colic, or gas.

Not many people know exactly which foods are bad to reheat. That’s why we’re going to show you the 6 most common foods that you might want to think twice about heating up again later.

Rice is one of the most commonly reheated foods. While its texture and flavor keep well at room temperature, the grains contain tiny bacteria spores that can cause food poisoning when activated by heat.

After cooking, exposing the rice to high temperatures increases the likelihood of contracting food poisoning.

It’s best to eat food as soon as it’s cooked. Your best bet is to eat rice within 24 hours of cooking.

Rice poisoning can cause stomach discomfort, inflammation and, in the worst cases, vomiting and diarrhea.

Potatoes are a really nutritious food that can be used in both hot and cold recipes. The risk presents itself when the potatoes are reheated or have been left outside the refrigerator for too long.

This produces spores that, once inside the body, may cause digestive discomfort and the symptoms of food poisoning.

The best way to keep from having to throw them away is by mashing them or using them in a cold salad.

Many people like to use celery raw because it lends an interesting flavor to salads and soups.

However, when using it in hot recipes, it’s best to eat everything soon after you cook it in order to avoid running the risk of food poisoning from reheating.

This vegetable contains nitrates that, when subjected to heat, create substances that are harmful to your health.

In fact, in high concentrations, these nitrates can turn into nitrites, which might be linked to an increased risk for cancer.

Beets are really popular vegetables that see a lot of use in natural medicine because of their significant amounts of antioxidants, vitamins, and minerals.

The problem occurs when they’re subjected to high temperatures. Like celery, beets contain a small amount of nitrates that aren’t exactly too great for your health.

On the other hand, nutrition experts suggest the best way to take advantage of this vegetable’s properties is by eating them raw in salads or blended into smoothies.

In order to safely consume chicken, it’s really important to make sure that it’s been thoroughly cooked.

Salmonella is quite common in birds, and undercooking chicken increases your risk of infection.

Check to make sure that all parts are cooked thoroughly and that there aren’t any areas that are too pink or juicy.

To prevent digestive problems, eat the chicken soon after cooking it and avoid reheating it. Chicken is one of the reheated foods that can make you sick if you don’t handle it correctly.

Although the flavor keeps well, the composition of proteins changes which can cause negative reactions in the stomach.

If you can’t eat it all in one sitting, it can be reheated, just at a lower temperature.

Check out this article: Make Salads to Lose Weight and Leave You Satisfied

The proteins in mushrooms are easily destroyed by the action of enzymes and certain microorganisms.

Keeping them at room temperature after cooking may not be safe for this reason.

We don’t recommend reheating them after their initial cooking because they can cause inflammation in the abdomen, distension, and in some cases, diarrhea.

However, there doesn’t seem to be a problem as long as they’re heated to a temperature above 160°F.

To wrap all of this up, keep in mind that the ingredients in your food are all different and undergo changes when subjected to high temperatures, so certain reheated foods are dangerous.

Be sure to cover your food the next time you go to reheat it so that it’s cooked evenly.

Is it Healthy to Cook Food in the Microwave?
Although it is not a risk to cook food in the microwave sporadically, the truth is that it can be dangerous if we use it to reheat food. Read more »
Link copied!
Interesting Articles
Illnesses
Fluoxetine during Pregnancy