Six Possible Reasons Why You Have Irregular Periods

Do you have irregular periods? It could be due to many reasons. This is why it's best to turn to a specialist as only they can rule out major problems and make a proper diagnosis. 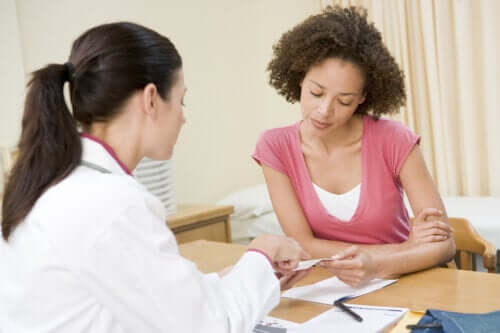 Many women have irregular periods. You may already know the menstrual cycle is a biological and hormonal process women go through. Also, that it involves many physical and mental health aspects. It generally happens every 28 days and can last from 3 to 6 days, depending on the hormonal activity.

During each cycle, a series of changes happen that play a direct role in sexual and fertility issues, though many try to ignore it. In addition, these appear in different forms at different stages of life. That’s because hormone production varies considerably between puberty and menopause.

Still, it’s essential to understand how to interpret irregularities when they come up, as they can indicate health problems or hormonal disorders. Having your period come too early or very late can be the key to detecting other abnormalities.

Therefore, according to various studies, its imbalance is linked to a large part of cases of amenorrhea or abnormal periods.

Some consider it the “master gland” because it works to control the endocrine system, metabolism, and sexual activity.

Oral contraceptives are designed for birth control. These pills keep estrogen levels high. The body interprets this as pregnancy, which prevents fertilization.

After taking them for 21 days, there is a “rest” week when women have completely regular periods.

The problem is that many times, irregularities show up when you stop taking these pills. There may even be no menstruation at all due to the hormonal changes.

It’s estimated that 29% of women who stop taking the pill after regular use have no periods up to three months later.

Several studies show that high-intensity exercise may influence changes in the adrenal, thyroid, and pituitary glands, which usually appear along with menstrual changes.

For example, women who run marathons or compete in other athletic endeavors may stop getting their period for a month or two because of the changes in hormonal activity. Actually, 81% of female bodybuilders have had irregular periods at some time in their lives.

4. Hormonal imbalances may cause irregular periods

Hormonal imbalances, like those caused by Polycystic Ovary Syndrome (PCOS), are a common cause of menstrual cycle irregularities.

This condition may alter the levels of sex hormones, including estrogen, progesterone, and testosterone. As a result, menstrual cycles may be altered as well, and in turn produce other symptoms such as:

Another hormonal issue it causes is called “premature menopause” or, in other words, menopause that starts before the age of 40. In this case, irregular periods may be accompanied by:

An article published in the journal Pediatric Endocrinology Reviews explains the relationship between irregular menstruation and stress. The reproductive system is controlled by both the neuronal and endocrine systems.

The hypothalamus is the neuroendocrine gland responsible for promoting the function of the ovaries. Thus, any alteration to it, such as that caused by stress, can affect the menstrual cycle. Thus, it’s possible that these changes lead to variations in the cycle or make it more painful.

We recommend: How Does Stress Affect Women?

Nutritional deficiencies may also affect the proper functioning of the thyroid and adrenal glands. A diet poor in antioxidants, vitamins, minerals, and probiotics may increase cortisol levels and lead to disorders like hypothyroidism and adrenal fatigue.

High cortisol levels do not just increase stress, however. They may also inhibit the activity of many important hormones, including those in charge of sexual activity.

At the first sign of menstrual irregularity, it’s crucial to make sure to eat a wide variety of highly nutritious food.

What to do if you have irregular periods?

In conclusion, it’s very important to know the possible factors associated with menstrual irregularity in order to treat them appropriately.