Did you know that due to the close relationship between the intestines and the brain, an excess of intestinal bacteria can even cause memory problems and anxiety? 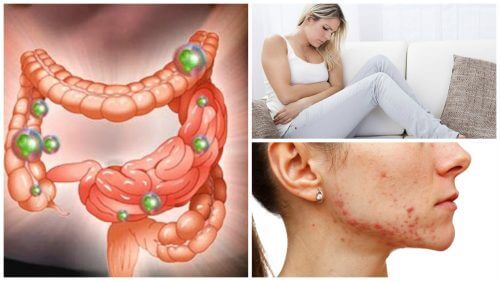 There is a microbe community living in your intestine called intestinal flora, or intestinal bacteria. Its importance is often ignored. Nevertheless, it plays a big role in the digestive process as well as in the immune system.

In a healthy individual, this group of bacteria is beneficial in regulating the digestive pH. At the same time, it creates a protective barrier against infectious agents, which can cause disease.

Due to poor eating habits, taking antibiotics, and stress, its activity can be compromised. This creates an imbalance in intestinal bacteria that puts your health in jeopardy.

As a consequence, this causes serious reactions. At first, these may seem common, however, after a time the problems become chronic and difficult to treat.

Because of this, it is imperative to know how this condition manifests itself when it becomes out of control.  When necessary, take timely measures to regain control.

Given that bacteria do live in the intestine, occasionally there are imbalances that cause negative reactions.

This is due to the damaging microorganisms growing out of proportion.  Therefore, it affects the processes in charge of breaking down food and absorbing nutrients.

As a consequence, there is an increase in the presence of acid juices and toxins. These cause symptoms such as the following:

Even though many people aren’t aware of it, the intestine has a close link to brain activity.  Because of this, imbalances can cause negative reactions to cognitive functions.

The microbial flora takes part in the production of various important neurotransmitters. When the flora is out of balance, there may be memory problems and other symptoms that affect thinking.

Once these bacteria are out of control and damaged, the digestive process breaks down and diminishes the capacity to optimally absorb nutrients

In the beginning, it is difficult to take note of this because the body keeps reserves of nutrients. As time goes by, there are a series of symptoms that indicate an important decrease in the bacteria.

Some of the most common deficiencies are:

There are many internal and external factors that relate to the appearance of skin problems. Among these, intestinal health has a close link to purification and absorption of nutrients.

Having any of the following skin conditions can alert you an intestinal bacteria imbalance.

Autoimmune diseases are usually chronic and occur because the body attacks itself in its quest to fight against agents that it considers dangerous.

This makes detection and treatment difficult because initially it is confused with some common ailments.

Even though the origin is diverse and should be analyzed by an expert,  you should not dismiss the idea that it is related to the intestines.

This is due to the change in bacteria which increases the level of inflammation of the tissues. It can also worsen the development of symptoms.

Some of the diseases are:

Stress is an emotional imbalance that tends to be connected to many internal and external factors.

Even though it is inevitable in some situations, it also can occur as a reaction to imbalances in intestinal bacteria.

In these cases there is an increment in the secretion of cortisol, adding to the toxins.  This affects the production of hormones related to well-being.

People experience symptoms of chronic and recurring stress,  in spite of taking measures to control it. This is an overwhelming sign of poor intestinal health.

Identify which of these problems is a reason to improve habits that help to promote intestinal health.

Adopting a good diet and avoiding constant exposure to toxins are some of the simple measures to take in order to avoid imbalances.

The Incredible Physiology of the Large Intestine
As we dive into the physiology of the large intestine, remember that we're only talking about the final section of the digestive tract. Read more »
Link copied!
Interesting Articles
Illnesses
Fluoxetine during Pregnancy