Salvia officinalis is an herb that has multiple uses both in the kitchen and in medicine. 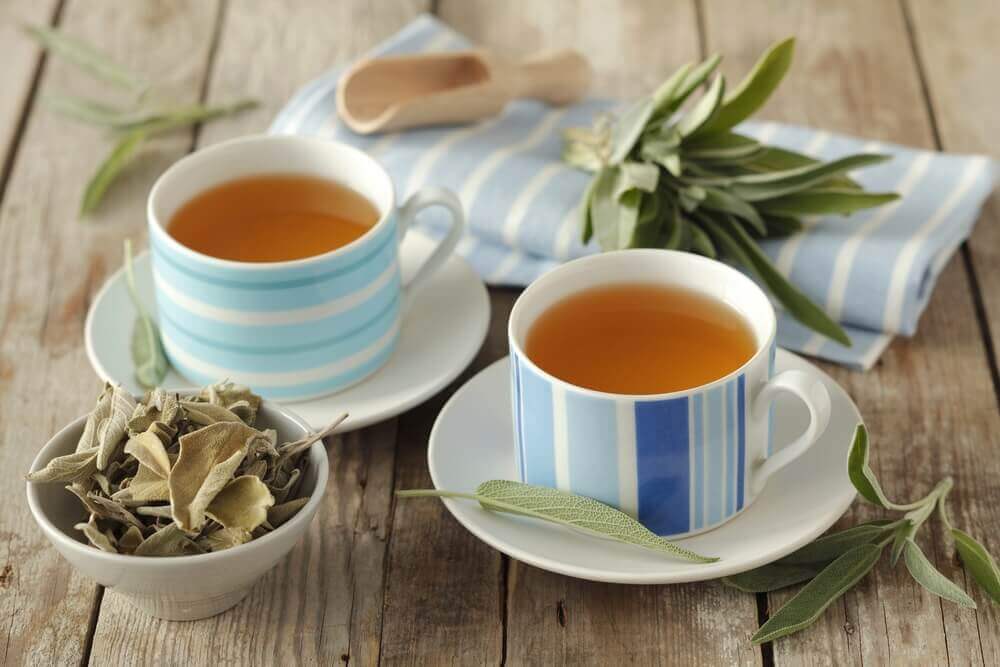 The healing properties of sage have been popularized for hundreds of years. Some people are still interested in taking advantage of them. Do you know what they are? In case you don’t, or you don’t remember all of them, we’ll discuss them below.

Since the Middle Ages, people have used sage (Salvia officinalis) as a home remedy for various issues. This herb is very easy to find and dispose of.

It has both purple and white flowers, so it’s easy to recognize. In addition, these make it possible to take advantage of sage as a decorative element with a “bohemian” or “wild” touch.

The healing properties of sage

According to a 2002 article on the phytochemistry, pharmacology and therapeutics of sage, “This plant contains several ketones, (benzofuranics) and alcohols (tansinones, miltirone, tanshinols, and salvio), as well as a small proportion of vitamin E. The most important effects manifest in the cardiovascular system and the blood”.

Sage is a plant that, when prepared as an infusion and drunk, could relieve certain discomforts, such as menstrual cramps, heavy digestion, fluid retention, hot flashes, and other discomforts of menopause, among others.

As it has an emmenagogue effect, it stimulates menstrual flow, which helps to relieve colic and stomach pain. In addition, its infusion could help with the following:

According to popular beliefs, sage infusion could relieve the discomfort premenstrual syndrome causes and inflammation (both in the abdominal area and other body parts).

Other benefits associated with drinking sage

The healing properties of sage can vary. For example, homeopaths believe that this plant can provide many more benefits, while scientific researchers and health experts have only been able to verify a few (such as those we mentioned above).

According to supporters of natural medicine, a sage infusion could help expel gases and avoid the discomfort that they cause when they build up in the abdominal area. For this reason, some affirm that it’s a good idea to drink a cup of sage infusion after a big meal.

In addition to being used as a stomach tonic, it’s also used as a remedy to relieve ulcers. However, if you have one, it’s best to avoid the consumption of herbs and the like, as it can be counterproductive.

Could it improve memory?

In view of the fact that it can moderate nervous system activity, some believe that some sage extracts could be a natural remedy to prevent Alzheimer’s and age-associated memory deficits.

However, it hasn’t been shown that this plant has such effects or that the regular consumption of its infusion can slow down the appearance of this disease. We’d need to delve deeper into this to determine if the herb is useful or not.

Discover: The Role Family Plays in the Treatment of Alzheimer&#8217;s Patients

As you’ve seen, the healing properties of sage aren’t essential to enjoying good health or maintaining a healthy lifestyle. Therefore, keep in mind that it’s best for you to adopt good lifestyle habits and ask your doctor what the most appropriate thing for you is (in case you have any discomfort).

Sage is an herb that’s also used to add flavor to preparations (especially pasta, lamb, and chicken). Thus, if you want, you can incorporate it into your recipes to give them a much more traditional touch.

Salvia Infusion for a Flat Stomach
Getting a flat belly is the goal of lots of people. In this article we'll talk about a great aid to achieve it; it consists of a salvia infusion! Read more »
Link copied!
Interesting Articles
Medicinal plants
Nux Vomica: What You Need to Know