Coconut oil is a very versatile product that can used for beauty, nutrition and even to fight diseases. Learn about 7 of the amazing benefits of this oil. 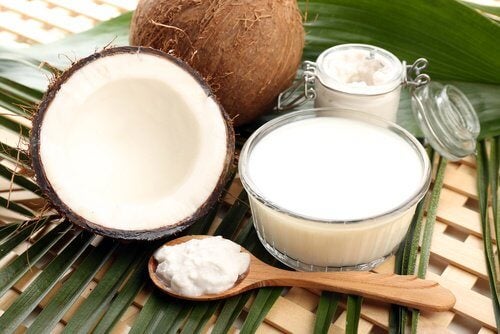 You’re probably familiar with the delicious flavor and aroma of coconut oil when you consume it raw or cooked. What you probably don’t know, however, is that coconut oil has a lot of benefits both for your health and beauty.

In fact, in traditional ayurvedic medicine, this oil has been a key element for health and well-being.

It’s considered to be the healthiest oil on earth and you could even argue that its benefits are infinite.

In the 1950s, coconut oil was called “the pharmacy in a bottle.” After you consume it, it’s absorbed directly by your liver from the intestine.

There, it is converted into ketones. These are used by your body as fuel to produce energy.

This causes your metabolism to speed up and less fat to circulate in your bloodstream, so you accumulate less fat in your body.

The list of benefits from coconut oil goes on and on, but we’ll give you a just few for starters.

1. Coconut oil is a natural antibiotic and antioxidant

The lauric acid contained in this oil acts as an anti-microbial agent against:

Several studies conducted at the University of Kerala (India) in 2013 also found that a diet rich in virgin coconut oil was beneficial in reducing oxidative stress.

This is responsible for cellular damage and a range of disorders, from Alzheimer’s to cancer.

In addition, it also has therapeutic effects against brain disorders, such as Alzheimer’s. The composition of it leads to an immediate improvement in patients who have mild forms of this disease.

Also, there is ongoing intensive study of the ability of the oil’s fatty acids to reduce cognitive decline.

3. It provides benefits for epilepsy

A ketogenic diet is characterized by a high fat content, adequate amounts of protein, and low carbohydrate intake. This diet can reduce seizures in children with epilepsy by up to 75%.

The medium-chain triglycerides (TCM) found in coconut oil increase the concentration of ketones, which helps reduce the symptoms of epilepsy.

If you want to get in shape, it’s time to take advantage of the metabolic benefits of coconut oil.

The TCMs contained in coconut oil can increase your daily energy expenditure by up to 5%. This means that you’ll burn around 120 more calories per day.

On the other hand, if you don’t know what metabolic syndrome is, you should also know that it’s a group of risk factors that can increase your chances of suffering from heart disease and other health problems, such as diabetes or a stroke.

6. Coconut oil can be used as a natural moisturizer

You may have already noticed that this oil is in lots of natural beauty products thanks to its many benefits.

This oil can make your skin soft, radiant, and healthy. It also penetrates easily into the skin and leaves it smelling great.

In addition to being an excellent moisturizer, it’s very useful for treating eczema and psoriasis.

7. It helps you get beautiful hair the natural way

As we’ve said, coconut oil makes a great moisturizer. If you use it as a conditioner, it will leave your hair feeling silky and with a healthy glow.

The lauric acid found in this oil has a high affinity for hair proteins. For this reason, your hair will absorb it with ease – even from the follicles.

A study that was conducted in 2003 found that another benefit of it is that it reduces the loss of hair proteins.

Whether you use it before, during, or after you wash your hair, you’ll get the same benefits thanks to its composition and low molecular weight.

To apply this oil to your hair, heat it first. Take some of the warm liquid oil and apply it from the root to the tips using your fingertips. Massage it in gently, and let it act all night.

The next day, wash your hair as usual. After the first application you’ll notice the changes: your scalp will be much more nourished and your hair will be more beautiful than ever.

These are just some of the incredible health benefits of coconut oil. As you can see, it’s not just a great choice for the kitchen – it also improves various aesthetic aspects.

Finding this product is simple, as any supermarket or natural grocery store will have a variety of options.

Of course, remember that adding coconut oil to your health and beauty routine should come accompanied by overall healthy habits.

Improve Your Oral Health with Coconut Oil
Did you know that coconut oil is the ideal ingredient for rinsing and brushing your teeth, and improving oral health? Read more below! Read more »
Link copied!
Interesting Articles
Natural therapies
Essential Oils For Winter Illnesses