There are many ways to drink cinnamon tea and take advantage of all its benefits, aside from the standard cup of hot tea. Learn all about them in this article! 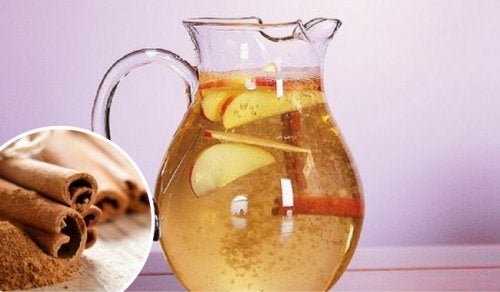 Cinnamon also has relaxing properties. Its strong aroma makes it one of the best options when choosing a scent for your home, office, or car.

The best way to get the benefits of cinnamon is by making a tea. This is because cinnamon releases a lot of its health benefits during the boiling process.

Always drinking cinnamon tea the same exact way can be boring, though. That’s why we’ve put together a list of some of the best recipes for cinnamon tea. Each one has a different flavor.

This cinnamon tea option is perfect for hot summer days. To get the benefits we described above, you can have a glass of this tea after lunch, as a snack, or after dinner.

If the taste isn’t quite to your liking, add 1 to 2 tablespoons of honey to improve it.

English tea is a classic, beloved beverage. If you feel like drinking cinnamon tea but don’t want to break your English tea habit, this combination is perfect for you.

It’s great for those cold winter days when something warm makes being in the company of family and friends feel even warmer.

This is a great way to have cinnamon tea, and it’ll give an entirely different flavor to a beef stew.

It’s a good way to get all the benefits into your diet if you don’t care for the taste or have been drinking cinnamon tea for so long that you’ve grown bored with it.

You rarely hear people mention cinnamon tea and stew in the same sentence. Although it’s very unusual, this recipe has some health excellent benefits for your health.

We recommend making it for family dinners or Christmas lunches. It doesn’t matter what you pair it with, as long as it’s something savory.

Discover the Weight Loss Benefits of Cinnamon and Honey Tea
If you include cinnamon and honey tea in a healthy routine accompanied by a balanced diet and physical exercise, it can promote faster weight loss. Read more »
Link copied!
Interesting Articles
Appetizers and main courses
Mexican Sopes: A Step-By-Step Recipe