5 Virtues of Fish Oil for Your Health 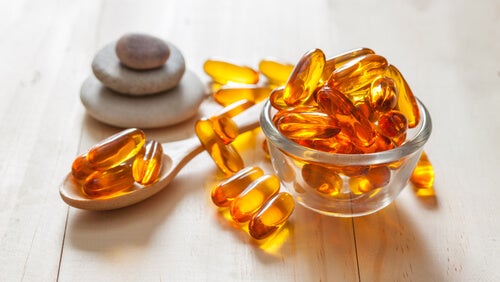 In the past few years, fish oil has been gaining more and more interest. The main reason that there are more and more buyers of this product is because of their high amount of omega-3s and for its positive effects on the body.

This is a fatty acids that is in charge of attacking and eliminating ailments in people, like cholesterol, in addition to reducing triglyceride levels.

The recommendation that comes with this type of product is to not consume it in excessive quantities. In fact, a portion of three grams a day is a sensible and healthy dose. If you take it to the extreme with fish oil, you can end up feeling dizzy and nauseous.

The main form of fish oil is in capsules, that are comprised of the recommended daily value.

By being a product extracted from animals, fish oil can also be obtained from a diet rich in fish, in the case that capsules are not available. Among them are:

Among its benefits, you will find the following:

1. It is good for your heart

Fish oil helps to prevent cardiac illnesses, arthritis and some types of cancer.

It is worth it to point out that different studies have revealed that, although it helps the heart, you get the best results from eating fish itself. However, the oil helps you to avoid the development of ailments that affect the arteries, as well as diminishing the possibility of suffering heart attacks.

2. Keeps the brain in perfect condition

As for its influence on the mental state, it has also presented excellent results. One of them is by keeping the functions of the hormones active, like serotonin and dopamine. Their lack of activity results in ailments like dementia and even schizophrenia, as well as Alzheimer’s disease.

However, when it comes to an already diagnosed ailment, it is better to consult a doctor to understand if its use is necessary.

By maintaining the neural level and also keeping the arteries in the best possible state, it is considered very helpful in avoiding the possibility of a stroke.

3. It is always good for children

For the younger age group, it is a product that is highly recommended.

At the motor level, it has been demonstrated that new-borns that take omega-3 supplements present greater coordination abilities in their extremities.

Also, they are able to better pay attention and concentrate for longer, situations that reflect the intelligence of a child.

For premature babies, some specialists recommend the supplement to help their brain development.

Another situation that can be seen in children, when their consumption of fish oil is limited, is attention deficit disorder.

There are many studies and research that displayed this product’s optimal use, given its properties that favor proper brain function.

The same is applied to those with hyperactivity.

Because it provides nutrients, it is very helpful for hair loss, since it keeps the hair follicles stimulated. It gives your hair shininess and increases its volume.

It prevents hair loss and keeps your hair strong and healthy. There are also many skin benefits. One of them is fighting dryness, which is without a doubt one of its strengths.

Its use to avoid burns caused by the sun is a cause of debate, but it is still recommended.

About situations that do have a direct impact, it works on acne and allergies. That is in addition to other skin conditions.

While a women is pregnant, and as was explained earlier, the consumption of this supplement is capable of having a positive effect on the baby. However, there are also other benefits that directly effect the mother.

If the past has not been positive and the woman has suffered miscarriages, fish oil helps to prevent premature births, or even spontaneous abortions.

6. It works against allergies

By helping with the optimal function of the immune system, fish oil is recommended for eliminating allergies.

It can be taken as a kind of treatment if allergies arise. However, it should be understood that it is just a complement, it is not a unique remedy for ailments.

Healthy habits
The Effects of Alcohol on the Nervous System