Symptoms of Depression, the Invisible Disease

A person suffering from depression doesn't want to be sad or constantly trapped in their own thoughts. In fact, they want nothing more than to escape their personal prison. 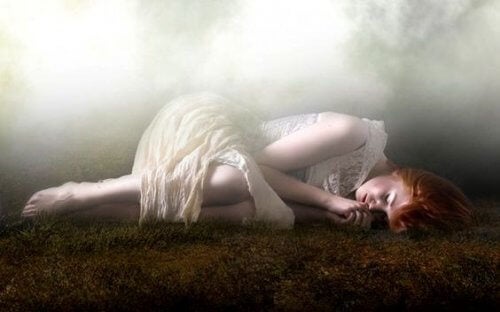 Depression is one of the most common mental illnesses in today’s society. According to figures from the World Health Organization (WHO), it affects almost 350 million people and that number will probably rise in coming years. So, what are the symptoms of depression and how can we combat it?

We should also remember that this disorder affects children and a good part of our young population. As a result, depression is responsible for a large number of suicides each year, but we don’t usually hear about this in the media.

We’re talking about an “invisible” disease. This is also the case with fibromyalgia, lupus, and bipolar disorder.

The symptoms of depression are not always so easy to spot. Depression leaves wounds that the general population often cannot sympathize with.

It’s not easy for healthcare professionals to diagnose and treat these diseases either. Primary care physicians have too little time and often don’t provide a thorough enough diagnosis.

Pharmacological treatments are not always effective either. In fact, psychotherapy is often the best solution for the problem. The truth is that society needs to be more responsive to these realities.

It’s perhaps for this reason that affected individuals feel so alone. Today on our website, we want to mention a few things you should know about this condition.

1. There’s no quick cure for depression

The time it takes to overcome or be healed from depression depends on its severity.

It often doesn’t help that people often give added pressure by offering inappropriate advice like, “be more positive” or “this isn’t a big deal, try to look at things from another point of view.”

Overcoming depression requires a very delicate internal restructuring. In addition to drugs, a person must make a very complex internal journey in order to learn how to change their thinking and get better control of their emotions.

It’s likely that, after three months, and pharmacological treatment, a person will experience an improvement. Some residual symptoms of depression, such as fatigue or insomnia, may remain.

These factors could, at any given moment, reactivate the disease. Recovering from depression takes time, support, patience and a lot of courage.

It can often take a while to receive the right diagnosis, because depression can be confused with other disorders.

“What you have is stress, you need to take things easy” or “I’ll give you something to help with anxiety”. These are all, without a doubt, the wrong things to say. Depression has many “faces” that aren’t always easily recognizable.

Consult a professional for a proper diagnosis.

3. Depression is not caused by sadness

We usually associate depression with sadness. However, most of the time it is like a “giant ball” made up of many different aspects. A lot of little things that create an insurmountable barrier.

The symptoms of depression, like helplessness, disappointment, frustration, anger, worry and fear trap the individual suffering in their own personal prison. We also can’t forget the role that genetics can play in whether or a not a person will develop depression.

Seasonal depression is another form of the disease and is linked to a lack of sunlight and feelings of loneliness. It’s something worth being aware of.

Depression has many origins, from situational and emotional to biochemical.

4. No one chooses this disease

Having depression doesn’t mean that a person is weak, lacking in character or courage. In fact, anyone can develop a mental disorder at any point in their lives.

No one is immune to the suffering or even changes to the neurotransmitters. We mustn’t forget that depression is, in many cases, a chemical imbalance in the brain that can’t always be controlled.

The disease takes over the person in every aspect of their lives. It steals their energy, motivation and even their self control.

People with depression stop caring about their appearance and hygiene, and even eating. It can make you say things that are the opposite of your desires or how you truly feel.

The bad moods, irritability, constant refusal to leave the house, make plans or spend time with others is very difficult for many families. People with depression need those around them to be understanding, as well as more kind, patient and loving.

Sooner or later, the dark cloud of depression will lift. Having courage and the support of family and good doctors are, without a doubt, the pillars of success in overcoming depression.

Diet for Depression: Foods that Cheer you Up
A diet that treats depression should include a combination of foods that are good for the nervous system and brain. Since there are many factors that can cause depression, certain nutrients are recommended to help control it. Read more »
Link copied!
Interesting Articles
Healthy mind
How to Help a Person Who's Suffering From Anxiety