5 Teas that Can Reduce Your Craving to Smoke

Although drinking these teas hasn't been proven to be an effective remedy against smoking anxiety, they can contribute, in some way, to relieve the symptoms. 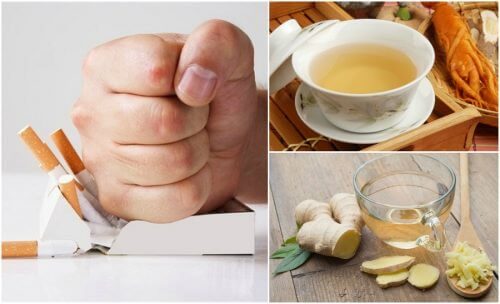 Few habits are as harmful to our health as smoking. However, despite this, the number of smokers continues to increase every year, especially among women and the younger population. The problem that smokers face (in addition to the large number of chronic diseases) is that the craving to smoke is very hard to overcome and and makes quitting very difficult.

Avoiding cigarettes has become a more difficult task. This is especially true of people who spend a lot of time smoking and get rid of their anxiety with this habit. However, all you have to do is make the decision to drop this habit. This is a very important step in developing a healthier lifestyle.

While the principle appears to be difficult, as time goes by, the dependency that drives you to smoke a lot will become reduced.

Fortunately, there are 100% natural teas that can be a great help when fighting this problem and will calm your desire to smoke. In this article, we’re going to share with you the 5 best ones so that you don’t wait to try them.

Read also: A Timeline of What Happens When You Quit Smoking

According to a study in rodents, vixetin, an active ingredient in passionflower, may help reduce cravings for cigarettes. However, it’s effectiveness has yet to be evaluated in humans.

In fact, according to studies such as the one conducted at Campbell University of Pharmacy, passionflower may be helpful in combating nicotine addiction.

Although much remains to be determined, scientists believe passionflower tea has relaxing properties that can help fight cravings for tobacco.

The Department of Chemistry and Applied Biosciences in Bern, Switzerland, conducted a study in 2010 to evaluate whether ginger helps reduce the craving to smoke.

This plant (and especially its root) contains antioxidants and anti-inflammatory properties. Therefore, scientists believe that it could be useful in combating withdrawal symptoms and removing the toxic residues left by smoking in the body.

Its calming properties control the desire to smoke. And, little by little, they help you to get rid of this harmful habit.

Daily consumption of ginseng tea is believed to help control the craving to smoke and, in addition, reduce the effects of nicotine on the body.

A study in rodents evaluated the protective effect of certain ginseng nanoparticles against nicotine-induced reproductive disorders and obtained positive results. However, the effect this could have in humans is unknown.

Still, a lot of people believe that ginseng tea can help them to control cravings when quitting tobacco.

Read also: Foods That Can Help You Quit Smoking

Saint John’s Wart is a natural remedy with antidepressant and relaxing properties. These improve your mood while reducing anxiety.

In fact, studies such as the one conducted by doctors Eric A. Apaydin, Alicia R. Maher, Roberta Shanman of the University of Santa Monica, have shown that this plant can be effective in treating both moderate depression and moderate anxiety.

This tea has been used as a complementary treatment for quitting tobacco. This is because it reduces the desire to smoke too much.

Licorice is a natural drink that has been used for decades as a natural treatment to reduce the craving to smoke. Its roots have natural active ingredients that boost mood. At the same time, they generate a nice feeling of well-being that reduces dependence on cigarettes.

Are you trying to quit smoking? If you have, and even if you haven’t, now is the time to make the decision to quit. You can rely on these teas to help you face this addiction that can cause you many health problems. In addition, don’t hesitate to ask for professional help. There are very effective psychological therapies. Make a commitment to yourself and start taking better care of your health.