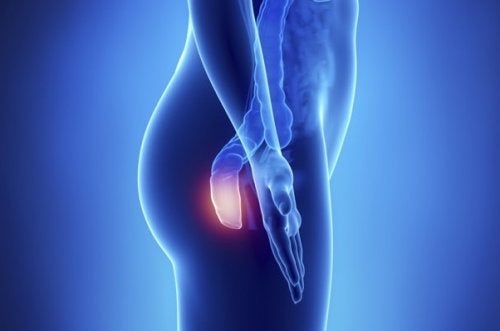 We don’t often pay much attention to our bodily processes. We go to the bathroom without thinking to check the stool for irregularities or traces of blood.

The anus isn’t just where the body expels feces. We need to remember that it’s a part of our bowels, specifically the large intestine.

Its ring-shaped muscles are composed of multiple cells that can, for various reasons, undergo genetic changes that produce abnormal or cancerous cells. There are certain risk factors we can control, but as you know with cancer, it doesn’t all depend on healthy living.

There are other factors we can miss that, for whatever reason, cause the disease to develop. This is why it’s so important to be aware of the symptoms.

This is the main symptom you need to know about. Occasional bleeding may be caused by other factors, which is why getting a proper diagnosis is important.

“Rectorrhea is a clinical sign that consists of the emission of red blood through the anus in isolation or along with feces.”

3. The appearance of warts

Many patients confuse them with common boils, but it’s important to keep track of them. Don’t be embarrassed to talk to your doctor. It’ll give you peace of mind.

We all experience small upsets in our intestinal transit from time to time. Everyone experiences occasional constipation or diarrhea. This is normal.

Read on: Medicinal Herbs Used in the Fight Against Cancer

The itching is often attributed to hemorrhoids, so many people resort to the classic creams and treatments to relieve the discomfort of a health problem not often shared with others.

We need to once again emphasize the importance of consulting your doctor at the first sign of any of these symptoms.

Early diagnosis increases the chances of treatment success significantly. This is why it’s important to consult your doctor if you have any concerns or notice any discomfort or unusual symptoms.

However, medical cancer knowledge advances every day, and new technologies, treatments, and drugs are constantly being developed to better help patients.

Tips to Face the News about Cancer
Receiving the news about cancer makes a huge psychoemotional impact on the person. Without a doubt, there is a before and after. Read more »
Link copied!
Interesting Articles
Illnesses
Characteristics of Henoch-Schönlein Purpura Disorder