Do you want to know why you have breast pain? Many factors are associated with this bothersome symptom. However, it rarely indicates a severe problem. In this article, learn more about this issue. 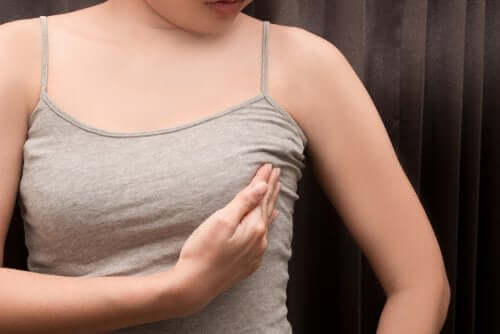 If your breasts hurt, you might wonder what the cause is. Breast pain, known in medical terms as mastalgia, is when the breasts become more sensitive to pressure or friction. It may also be a sudden, abnormal pain, although this could also be normal at the end of the menstrual cycle or during pregnancy.

The pain may manifest in one or both breasts or even in the axillary region. The intensity of the discomfort is variable and there are many possible explanations for it. In addition, as a publication in BMJ Clinical Evidence points out, it affects up to 70% of women at some point in their lives.

Breast pain is a frequent reason for medical consultation among women. One of the reasons is the concern regarding breast cancer. However, contrary to what many think, this symptom in itself isn’t a sign of this disease.

As an investigation published in the European Journal of Breast Health concluded, mastalgia in and of itself isn’t a sign of malignancy. However, it’s always advisable to get relevant exams done.

However, according to a study published in Breast Care Journal, factors such as stress, caffeine, smoking, breastfeeding frequency, and benign disorders are related to this medical condition. Do you want to know the other possible causes of your breast pain? Discover it below.

Mastitis causes breast inflammation and is principally caused by an obstruction in the milk ducts. In some cases, it could also be due to breast infection.

Aside from the pain, it’s also accompanied by:

The main cause of mastitis may also be dried and cracked nipples. This allows infectious organisms to come in. A weakened immune system or giving birth may also expose the mother to certain organisms that also lead to this problem.

To treat mastitis and the breast pain it causes, it’s imperative to follow doctor-recommended treatment. You should also make sure your baby is feeding correctly.

To avoid nipple cracking, you should pump milk every two hours and then apply a moisturizing cream.

This is a very common problem in women. It’s a benign growth that usually appears for hormonal reasons and consists of small balls of liquid. They can also appear when the breasts change size. Although there’s no apparent cause for them, they can be quite painful, according to a Mayo Clinic publication.

It’s important that you consult a doctor to treat the problem. Most of the time, no surgery is required to eliminate them. If the doctor finds the condition to be more serious, you may be given more advanced treatment.

Fibromas are benign tumors that primarily affect premenopausal women. First of all, you need to understand that tumors and cysts aren’t the same things.

For instance, fibromas are cellular formations that grow quickly, forming excess tissue. In addition, according to Cleveland Clinic, they can cause symptoms such as breast pain and lumpy, free-moving masses.

These masses usually vary according to:

Occasionally, they may be larger and require surgical extraction. However, fortunately, they disappear with minor treatment in most cases.

Food-related factors have been associated with a higher incidence of premenstrual mastalgia. However, according to a recent study published in the European Journal of Breast Health, the evidence in this regard is controversial.

In this sense, it was mentioned that the consumption of foods such as chocolate, coffee or caffeinated beverages, and fast food, among others, could cause an increase in this medical condition.

However, as this research concludes, nutritional factors contribute less to the risk of mastalgia than what was previously believed.

Therefore, although it’s advisable to maintain a good diet to promote well-being, you shouldn’t blame foods as such when your breasts hurt. Instead, it’s best to consult your doctor to determine other possible causes.

You may suffer from many symptoms during your menstrual cycle. One of these is breast pain. This is a very sensitive area that may become untouchable in the days before or during your period.

Hormones are the main reasons for breast pain during menstruation, and also in the bodily changes that occur during those days, such as general bloating, fatigue, and chest pain.

This article may interest you:5 Hot Drinks to Soothe Menstrual Cramps

Estrogen and progesterone are the two hormones produced during menstruation that also prepare women for pregnancy. They’re the cause of premenstrual and menstrual symptoms, such as weight gain and painful swelling of the breasts.

There are many reasons for breast pain. Each woman is different and you shouldn’t assume that what a friend or family member experiences will be what you experience. If you have any doubts, consult your doctor.

Finally, remember that you should never self-medicate. Although some over-the-counter drugs may help the problem initially, indiscriminate use can also lead them to be ineffective and cause side effects.

Treatments Options Against Breast Cysts
Although breast cysts don't tend to be dangerous, it's a good idea to talk to your gynecologist so they can examine you and make a diagnosis. Read more »
Link copied!
Interesting Articles
Illnesses
Characteristics of Henoch-Schönlein Purpura Disorder