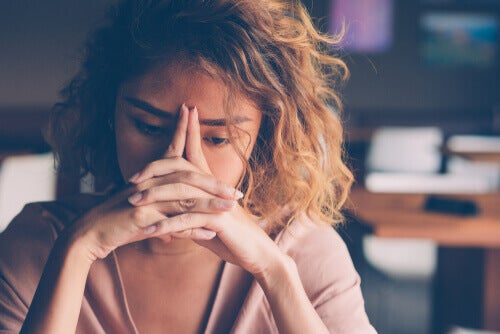 Highly sensitive people can cause misunderstandings in others. Many times, they’re seen as “exaggerating” their issues.

They respond to everyday situations with automatic and undesired eye-catching reactions. This is normal for them, and others should keep that in mind.

However, judging them before you know what’s going on causes misunderstandings. Most people don’t know the discomfort that they feel and that causes these kinds of reactions.

Today, we’d like to provide you with a guide to understanding some common reactions of highly sensitive people.

For very sensitive people, having several different tasks to do can be overwhelming. They prefer to concentrate on one and give it their all. In fact, they’re usually very creative people.

They work better alone and in a quiet atmosphere. When they can’t have this environment, they get stressed and are unable to be effective and productive.

When there’s noise around them or someone insists on them being attentive to many issues, they start to feel blocked.

At this point, highly sensitive people become irritable and are difficult to put up with.

In our society, chaos is always well-received, it seems that we look for sound, loud music, and strong stimulants that keep out silence.

However, highly sensitive people avoid all of this.

Being stimulated by too many things at once drives them crazy. Smells, sounds, interruptions, etc. These all take away the balance they had up until that moment.

Sometimes, it gets to the point that they even get annoyed by the sound of chewing.

The reaction they give when presented with these “small things” is interesting. They also usually end up annoying the people around them who don’t understand that they’re making them uncomfortable.

A person who is highly sensitive takes the experiences they have personally. This happens because they’re empathetic.

This also comes from the fact that they focus on details. They’re experts in analyzing non-verbal communication that says more than words do.

Because of this, they can always tell whether you’re trustworthy or if you’re hiding something.

They don’t like this. It’s also a point of concern to others. This is because people don’t generally focus on and analyze these micro expressions that we all have.

Some believe that these are simply in their imagination. Others try to say that “they shouldn’t take it personally.” However, none of this will work for them.

This could be a big surprise to the rest of the world. After all, people generally avoid being alone. They fear feeling separated from everyone and everything.

However, people who are highly sensitivity look for solitude. They seek moments of peace and calm when nothing from the outside world will affect them.

It’s normal for them to decline invitations, turn off their phone for a day, or not feel like answering messages.

Unfortunately, this can cause their friends to get upset. This situation sometimes gives them problems with their partner.

This doesn’t mean that they don’t want to spend time with their friends. It just means that they need more time for themselves than others do.

5. If something hurts, sensitive people aren’t the same

A headache, a stomach ache, being hungry, or any other discomfort can become unbearable. This causes instant changes in their behavior that make people around them worry.

Sometimes, it’s difficult to deal with highly sensitive people. After all, putting ourselves in their shoes is very difficult.

However, not judging, asking questions to understand, and opening your mind to be able to understand how they see the world is extremely helpful for both of you.

Are you a highly sensitive person? Have you been around one?

The 5 Most Common Signs of Autism
Autism is defined as a neurobiological development disorder or autism spectrum disorder (ASD). Signs of autism usually manifest themselves in the first three years of life and which will last for their entire life. Read more »
Link copied!
Interesting Articles
Conflicts
How to Help a Woman who Has Been Abused