Besides medication, a healthy diet, and physical activity, certain medicinal plants can do a lot when it comes to controlling diabetes. Here, we'll tell you what they are. 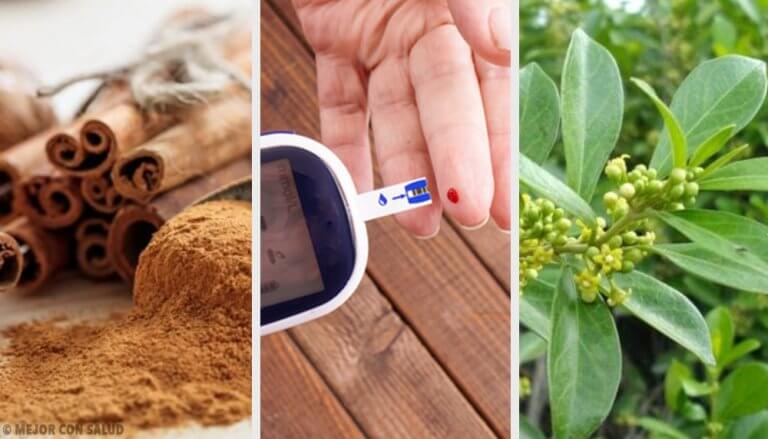 According to the World Health Organization (WHO), diabetes is one of the most unappreciated causes of death. However, if it’s not controlled, diabetes can cause heart disease, kidney failure, gangrene, blindness, and even death. Here, we’ll give you some information you may find quite interesting, along with certain medicinal plants for diabetes.

Diabetes is a chronic illness that develops when the pancreas either doesn’t produce enough insulin or when the body doesn’t properly use the insulin it does produce. If this isn’t managed, the blood ends up with too much sugar.

Diabetes is classified as:

Is there a cure for diabetes?

So far, science has not discovered a medication that completely cures diabetes. Currently, it can only be controlled with drugs, diet, and physical activity. The goal of these three strategies is to control blood sugar.

Nature provides us with certain medicinal plants for diabetes, the objective being to control blood sugar. However, it’s important to check with a doctor to make sure there won’t be any negative interactions with your medications.

The best medicinal plants for diabetes include:

Copalchi comes from Mexico and Colombia. The bark functions as a hypoglucemic and antipyretic, among other things. How does it help fight diabetes?

Well, copalchi bark contains a substance that generates glucose through hydrolysis. It helps improve the secretion of your pancreas and the metabolism of carbohydrates. Therefore, blood sugar levels go down.

It is recommended for type 1 and 2 diabetes, since it helps with appetite and thirst, while also lowering a fever.

Here is a way to prepare it (we should warn you it tastes quite bitter!):

This plant is mainly found in Asia, and particularly in India, in the southern tropical areas of the country. Gymnema lowers your blood sugar and helps you lose weight. Also, it’s diuretic, anti-inflammatory, and detoxifying. It’s also used for weight loss and arthritis.

How does it with diabetes? When you consume it, you feel less of a desire to drink sweet things, since it acts much like glucose molecules. In other words, the plant blocks sugar absorption. Therefore, it’s good for both preventing and controlling diabetes.

Here’s how to prepare it:

Eucalyptus is very well-known for its ability to help with respiratory problems. However, both the fruit and leaves also reduce glucose levels, as well as lowering a fever. They act as an expectorant, antiseptic, and anti-inflammatory too.

Together, all of these properties help get glucose under control.

Now, here’s how to make it:

Even though cinnamon tastes sweet, it’s actually good for people with diabetes. Cinnamon comes from India. Some of its highlights include the fact that it’s good for your digestion, helps get rid of gas, acts as a stimulant, and is an antiseptic.

How does it help with diabetes? This plant helps stabilize sugar levels, as it stimulates insulin receptors, which naturally lower the glycemic index.

See also: How to Regulate Blood Sugar with Ceylon Cinnamon

The last of our medicinal plants for diabetes is stevia. Stevia is a sweetener originally from Brazil and Paraguay. The leaves lower blood sugar levels in addition to blood pressure. They are also diuretic, antibacterial, and antifungal. Amazingly, despite being up to 50 times sweeter than sugar, it contains no carbohydrates.

How does it fight diabetes, then? It induces beta cells, found in the pancreas, to produce insulin, thus lowering glucose levels.

Read more: Make Your Own Sweetener: How to Grow Stevia at Home

10 Initial Diabetes Symptoms You Can’t Ignore
Before fully taking hold, diabetes can show up as certain symptoms that we should know how so recognise to that we can get an early diagnosis and access timely treatment Read more »
Link copied!
Interesting Articles
Medicinal plants
Nux Vomica: What You Need to Know