5 Lies About Sugar According to Science

Sugar has become the enemy of healthy eating. Should we believe everything we hear about it? We’ve identified 5 lies about sugar according to science. 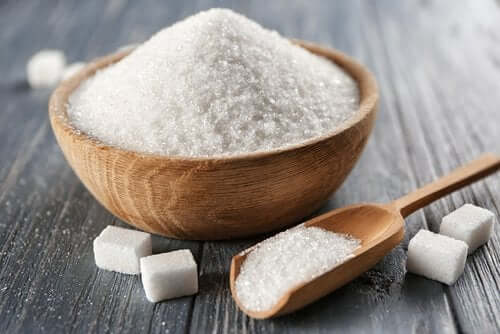 For a few years now, we’ve witnessed a real nutritional debate on sugar. Like the war on fat, sugar has become one of the main themes in nutrition literature. We reveal 5 lies about sugar that science has been tasked with debunking.

It’s important to take a look at certain statements on this topic. That way you’ll be able to know if sugar is an ingredient that should be part of your diet or if we should restrict it from our usual diet. Don’t trust so-called gurus, instead pay attention to science. Here we take a look at 5 lies about sugar according to science.

5 lies about sugar: Is sugar necessary for the body?

A widely used claim in advertising is that sugar is a necessary substance in order to function, especially in adverts for sugary breakfast products. For example, they say: “foods rich in sugar are the fuel you need to start the day with maximum energy.” Really?

If we look at what the authorities say in terms of food and health, we discover that this statement is not entirely true. In fact, there’s no established minimum sugar intake; quite the opposite. The World Health Organization (WHO), the European Food Safety Authority (EFSA) and the United States Department of Agriculture establish maximum limits that mustn’t be exceeded.

White sugar has no nutritional value and the less you eat of it the better. What our cells need to function is glucose. And you can get this from different substrates. The most common are carbohydrates, not just sugar.

According to these organizations, the best sources of carbohydrates are:

Discover more: Tips You Should Know if You Like to Run

This is one of the most widespread lies about sugar. It’s based on the belief that brown sugar, like other natural sugars, provides nutrients, and doesn’t just sweeten food. So it can seem like a better option when choosing a daily sweetener.

Quality brown sugar is less processed than white sugar. For this reason, it preserves a part of the molasses that gives it its characteristic brown tone. Molasses have some nutrients such as certain vitamins and minerals. However, this is in such small amounts that it isn’t relevant at all in nutritional terms. This doesn’t make it a source of nutrients.

In fact, we should be careful with the use of brown sugar to sweeten drinks, yogurts, cakes, etc. The body’s reaction is the same and, therefore, a high level of consumption can cause obesity and cavities, even if it’s brown sugar and appears to be healthier.

The bad reputation of sugar and sugary products has made the range of ‘sugar-free’ or ‘no added sugar’ products grow incredibly fast. However, most of them are still overly sweet products and contain a long list of sweeteners.

Artificial sweeteners are usually low in calories but still sweeten food products to make them more palatable and tasty. But its negative effects have long been under the scrutiny of science. The use of any of them is, at the very least, questionable, given its possible relationship with health problems.

Some scientific studies link them to obesity, metabolic syndrome, and alterations of the intestinal microbiota. Also, nutritionists aren’t certain that they’re an effective formula to help diabetics control their blood sugar levels.

Current scientific evidence suggests that the best option is to restrict your intake of these sweeteners. At the very least, try to limit your consumption. The presence in your diet of these substances could be as harmful in the long run as sugary products.

See also: Vape Pens: Everything You Need to Know

This is one of the most recent lies about sugar to come out. Social media is full of stories from people giving their experiences of trying to cut out sugar. And there are some theories about the addictiveness of sugar.

However, in one of the latest reviews of scientific literature on the subject, the authors concluded that “there isn’t sufficiently compelling science on the addictive potential of sugar“. Having said that, a recent investigation published in the British Journal of Sports Medicine confirms that this addiction is real in animals.

Some nutritional experts focus the problem of possible addiction, not on sugar, but on ultra-processed foods rich in sugar, fat, and salt. These foods are designed to be highly palatable, which means that the foods are so delicious that we can’t stop eating them.

Does sugar cause child hyperactivity?

Many parents begin to control their children’s sugar intake because of the effect it can have on their behavior. It’s common for children to get a bit hyperactive at children’s parties when they consume sweets, and it can help them to play more with their friends.

It’s natural for a cause-and-effect relationship to be established between sugar and animated behavior. But is it just the exciting effect of sugar? Can fatigue or the environment also play a role?

So far, there’s no scientific evidence that sugar causes hyperactivity in children who consume it. However, some authors suggest more research is needed on the high consumption of added sugars.

Either way, there are many reasons to discourage and reduce sugar intake in children. You should keep in mind that, today, many exceed the maximum recommended amounts that can prevent health problems, such as tooth decay and obesity.

You need to reduce the consumption of sugar in the diet

Now that we have a better understanding of these lies about sugar, we’ll be able to make better food choices. Remember that the best option is always to limit the consumption of this ingredient. Excessive intake can bring on the appearance of complex diseases in the medium and long term.

What Is Ischemic Heart Disease?
Coronary heart disease is known as ischemic heart disease. As its name indicates, the underlying process that causes the problem is ischemia. Read more »
Link copied!
Interesting Articles
Healthy diets
The Key to Eating Well