5 Important Things You May Not Know about "Broken Heart Syndrome"

Although it is an illness more commonly found in women, men can also suffer from broken heart syndrome if they have any type of previous heart issues and are subject to a lot of stress. 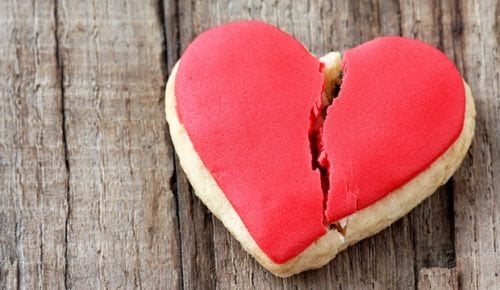 It’s so much more than the poetic and symbolic meanings that we associate with the term “broken heart.” Broken heart syndrome is a real heart condition that we should know about.

It’s curious that this stress-related cardiomyopathy was only described recently for the first time.

In the 90’s, a Japanese doctor first published a scientific article about it. In it, he described a series of clinical characteristics that the rest of the medical community was not familiar with.

When this disease occurs, a light contraction of the left ventricle causes a choking sensation and excessively increases adrenaline.

These are the three basic characteristics that Takotsubo used to define the cardiomyopathy.

However, from then until now, this medical condition has become far more well known. With this knowledge have come aspects that have nuances and still need to be studied.

Among these is the fact that it’s a heart condition that resolves itself in a few days without causing any issues. In addition, it curiously only affects the female gender.

While there’s still so much science needs to discover about this disease, it’s important to know what triggers it and how to prevent it.

Today, we’ll take a look at some interesting facts about this syndrome.

1. Broken heart syndrome can be more serious among men

Broken heart syndrome is very common among women. Actually, many believe that it’s exclusive to this gender. In addition, many mistakenly think that this is the most common heart issue that one can suffer from.

However, we want to clear some things up:

Men present greater clinical history associated with heart issues than women. Because of this, the fact that this type of stress-related cardiomyopathy can appear at any moment could result in something very serious or deadly for a man who has prior cardiac issues.

Likewise, it’s worth pointing out that although it’s more normal in females, this does not mean that it’s a common medical issue or that doctors see it every day in their medical centers or emergency rooms.

In this case, we’re dealing with a type of temporary cardiac abnormality. In reality, it’s not as common as heart attacks.

2. There is no heart failure: it’s a temporary disorder

The most complicated thing about Takotsubo cardiomyopathy is that the person actually thinks s/he is suffering a fatal heart attack.

The symptoms are the same. However, once the doctors have finished their clinical tests, they realize instantly that it is not heart failure:

In general, this change resolves itself after time without any consequences.

However, it’s an issue if you have previous heart problems or if you suffer from it on more than one occasion.

5 Ways to Recognize a Heart Attack

3. Suddenly, our emotions attack our heart

A disappointment, a loss, a strong emotional impact, bad news…

Our mind is not prepared for adversity and, when it appears, our brain reacts to it poorly: releasing a combination of toxic hormones that directly attack the heart.

The person thinks s/he is going to die. Her or his emotions suddenly are the enemies, because it’s as though the person doesn’t know how to properly handle certain moments of life.

The Release of Adrenaline: the Activation, Stress and Headache Hormone

4. Can I die from broken heart syndrome?

An idea that has become very popular is that no one can die from “having a broken heart.”

However, we need to clarify a few things:

So, you should look at this medical condition as a “warning.” Consider it a direct invitation to take care of yourself a little better, both physically and mentally.

5. No one is prepared for adversity or bad news, but we can “train ourselves”

We already know that no one can prevent what will happen tomorrow, and no one knows how to react to bad news.

The best thing to do is take care of your body and train your mind to make it stronger. Learn to remain calm on the inside, to be resilient, and to have self-control.

Here are some basic guidelines.

In conclusion, although broken heart syndrome may not be a serious or deadly medical condition, you should view it as a demonstration of how your emotions – when not properly managed – can cause you pain at any given moment.

Interesting Articles
Beauty
Hydroquinone: What Is It For?