Some natural remedies seem to help soothe a runny nose temporarily. In addition, due to their nutrient content, they have the potential to strengthen immune functions. Discover them! 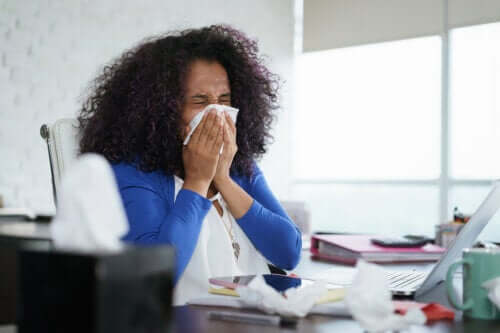 A runny nose is an uncomfortable symptom that occurs when the mucous membrane of the nose becomes overactive and produces too many fluids to fight allergens and irritants.

It usually occurs as a result of excess mucus due to a respiratory infection, although it also appears due to hormones, prolonged use of medications, or temperatures that are too cold.

Although the glands in the lining of the nasal cavities and paranasal sinuses produce mucus to keep the area lubricated, their alterations produce excesses that can cause congestion and drips.

Fortunately, regardless of the cause, there are several home remedies that seem to contribute to its relief. While they don’t cure the underlying causes of this condition, they can be an adjuvant to temporarily soothe this symptom.

A publication in Stanford Children’s Health notes that a runny nose goes away on its own in most cases. However, if it persists for more than 10 days, it’s best to consult a doctor, as it may be a sign of more serious illnesses.

However, depending on the cause, the physician or otolaryngologist may suggest nasal washes, oral medications, or medications applied with an atomizer in the nose. In addition, if it’s a more complex case, surgery may be necessary.

In milder cases, it may be useful to use some home remedies to soothe this discomfort. However, it should be noted that these are options that lack evidence and that, for the most part, come from popular culture.

Therefore, while in some people they produce a certain sense of relief, in others they may have no effect. If you still decide to try them, pay attention to the following options.

This remedy stands out for its significant vitamin C content. According to information published in Nutrients magazine, vitamin C plays an important role in strengthening the immune system and preventing infections.

As we know, colds, flu and other infections of the respiratory system are a frequent cause of runny nose. Therefore, you can supplement your treatment with this interesting traditional preparation.

Although the evidence is quite limited, onion remedies have been used in natural medicine as an adjuvant to reduce symptoms such as nasal congestion and runny nose. Would you like to try it?

This classic homemade syrup consisting of honey with lemon continues to be used as an adjunct to help relieve the symptoms of respiratory illnesses. In fact, studies indicate that honey has antioxidant, immunomodulatory, and anti-inflammatory properties that may explain these benefits.

Visit this article: 6 Essential Oils that Control the Symptoms of Allergies

Cumin is a spice with anti-inflammatory properties that could help reduce irritation of the nasal passages in case of congestion and nasal drips. According to a study published in Integrative Medicine Research, its oils are useful in reducing the irritation of mucous membranes in case of sinusitis, colds, or flu.

Overall, it’s ideal to reduce the irritation of the mucous membranes in cases of sinusitis, colds, or the flu.

Cayenne pepper has an active substance known as capsaicin, which can help dissolve mucus to reduce nasal congestion and runny nose, according to a study published in the Annals of Allergy, Asthma & Immunology.

Note: avoid this remedy if you are breastfeeding. Also, you should not drink it if you have kidney disease or liver problems.

Avoid exposure to irritants to soothe a runny nose.

Remember that, in addition to consuming these remedies, it is advisable to increase your fluid intake and avoid smoke or polluted environments. The less you expose your nose to irritants, the faster you’ll reduce your runny nose.

Also, keep in mind that you should use these natural remedies with caution, especially if you’re undergoing medical treatment or if you have a medical condition. Consult your medical professional to determine if they may cause side effects.