Vitiligo - prevent it with these natural remedies

You cannot miss this article if you have vitiligo. We'll tell you what causes this condition and we'll also recommend some home remedies to reduce its appearance. 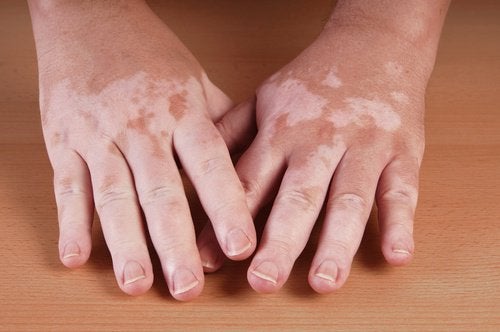 Vitiligo, according to this study by the University of Massachusetts, is a skin disorder that occurs when cells in your body’s skin tissue lose their normal pigmentation, resulting in the appearance of light-colored splotches in highly visible areas like the hands, stomach, face, or neck.

If you have white spots on different areas of the body such as hands, abdomen, face or neck, among others, you may have vitiligo.

In some cases, it can also occur on the insides of the mouth, in your nasal cavity, around the genitals, and even in the retina of the eye.

While this disorder primarily affects the skin, treatment must include emotional support, as it also typically affects the self-esteem of the people afflicted by it. In fact, research suggests that certain emotional problems could worsen this condition.

So far, researchers haven’t been able to determine the exact cause of vitiligo. Some suggest it’s an immune disorder that causes the development of antibodies that attack the pigment of your skin cells.

Melanocytes, the cells responsible for skin pigmentation might be altered or simply die, leading to the appearance of these white patches on various parts of your body.

What scientists do agree upon is that most cases of vitiligo are genetic. This condition has no cure, but you can treat the symptoms and improve the quality of life.

People who have vitiligo must be especially careful with their skin, as this condition causes the light patches to be more delicate and sensitive.

Let’s look at some of the advice:

It’s important that you protect your skin from the sun’s harmful UV rays, using a good broad-spectrum sunscreen. Apply it generously all over your skin, at least a half an hour before going out into the sun.

You can also wear hats, sunglasses, and protective clothing to cover your skin, and generally avoid going out in the sun during the strongest hours. People with vitiligo usually burn more easily. There are, in fact, studies, such as this one carried out by the Department of Dermatology at Brown University. It affirms the correlation between burns and the risk of suffering from this disease.

There’s a tattooing technique known as micro-pigmentation and it can conceal vitiligo patches, or at least it makes them less obvious. But this technique isn’t recommended.

Research carried out by the Dermatology department of Vardhman Mahavir Medical College and Safdarjang Hospital in New Delhi states that this technique could be harmful to your dermatological health due to bacteria, infections and even malignant tumors in the long term.

Some natural products react well with the skin to slow down the progression of vitiligo. However, their effectiveness will vary from person to person, and they require a consistent application before you see any results.

Most experts agree that the following substances benefit people with vitiligo by increasing the intake of vitamin C, folic acid, alpha-lipoic acid, and vitamin b12 through the diet. For this reason, they recommend the following types of food as they can provide nearly all of the aforementioned nutrients. Keep in mind that these are just some possibilities.

Consult your doctor for a more extensive list of natural options with which to improve vitiligo.

This fruit, according to some studies, contains papain, which helps reactivate melanocytes so that they can produce melanin. It’s a rather inexpensive alternative and you must apply frequently in order to obtain the best results.

Read also Did You Know These 7 Uses and Benefits of Papaya?

Clay contains copper and some people believe it can help restore the pigmentation of the skin. It’s for this reason that it’s one of the most popular remedies against vitiligo.

However, scientific studies deny any kind of positive influence in regard to the improvement of this condition. You may still want to try it, though:

Another home remedy for vitiligo includes turmeric, a spice with many benefits to your skin, according to this study by the Department of Dermatology at the University of California. However, this same study recommends caution, as there’s still not enough information to assure its benefits in skin disorders.

This is a small aquatic plant that often grows in lakes and ponds and is a good treatment to reduce the effects of vitiligo, according to this study by the Journal of Dermatology and Clinical Research. Unfortunately, it can be hard to find.

Ginger root has become very popular thanks to its many medicinal applications, and it may also be useful in the treatment of vitiligo, due to its ability to improve blood flow, according to research.

Grate the ginger root and then mix it with mustard oil and ground turmeric. Apply this as a paste directly to the affected areas, and leave it on the skin for 20 minutes.

You must consult your doctor before taking any remedy. They’ll know how to guide you.

What do you think of our recommendations to improve vitiligo? We hope they’ll be helpful to you.

What is Vitiligo? Learn All About its Causes and Cures
What is vitiligo? While vitiligo is considered a benign illness, it can be the cause of social and psychological issues for those who suffer from it. Read more »
Link copied!
Interesting Articles
Natural remedies
3 Home Remedies with Honey for Respiratory Health