5 Consequences of Emotional Abuse that Shouldn't Be Overlooked

Psychological abuse leaves marks on the person who's suffered it. From difficulties relating to others to a great inability to believe in themselves. What can you do about it? 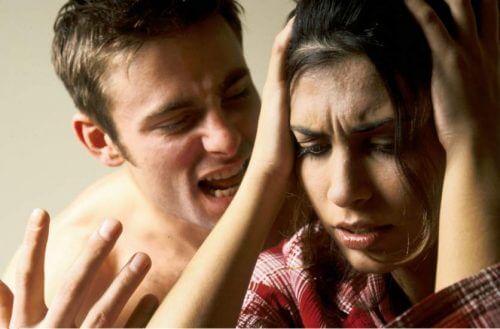 Emotional abuse is a type of violence that affects the emotional stability of the victim and that, in many cases, goes unnoticed, especially at the beginning. Through words, gestures, and silence, the aggressor intimidates their victim when they’re alone and, little by little shackle them, taking away their freedom.

It’s a progressive and silent process, but very negative and hurtful because the aggressor tends to take advantage of the other person’s feelings. In fact, the victim often justifies their behavior and thinks that they’re truly guilty and inferior.

The most worrying thing is that, although it can be overcome with the right help, it’s very possible that it leaves some emotional consequences. These can manifest even some time later. For this reason, it’s important to know what those consequences may be and what to do about them.

Next, we offer you a list of the most important consequences of psychological abuse. There are many more, but these are the most common. Please don’t let overlook them!

1. Seeking approval from others

A constant craving for approval from others is one of the classic long-term repercussions of psychological abuse. It often manifests itself in unexpected ways, through behaviors such as:

That need to feel accepted in the social environment, including with those closest to them, springs from a feeling of “not being enough.” Typically, the abuser planted this in the person’s mind over the course of the abusive relationship.

However, in the long run, putting other people’s needs before your own can actually become a weakness, because you forget about yourself.

Do you want to know more? Read: How to Think Independently and Boost Self Esteem

After suffering psychological aggression, it’s common to feel resentment. This may be both towards oneself and towards the person who caused the damage.

This accumulates over the course of time. Plus, it can end up manifesting itself in feelings of guilt, irritability, and frustration.

Anxiety and depression are psychological disorders that commonly affect people who have found themselves subjected to physical or emotional abuse. The destruction of their self-esteem and the constant feelings of guilt they experience create a negative swirl of emotion that can lead them on the path to self-destruction.

Often, victims experience difficulties leading their life normally, requiring outside help to get back on track.

4. Trouble relating to others

Due to the emotional consequences of the experience, their ability to establish social relationships decreases. Also, since self-esteem and self-issues remain, there’s a high odds of establishing toxic bonds with others. Hence, you have to be careful.

Visit this article: 4 Self-Love Habits that Every Woman Should Adopt

Going through painful situations in which your self-esteem has been attacked often leaves you with blockage that prevents you from feeling and expressing your emotions.

The victim doesn’t feel bad, but can’t feel happy, even when they have a reason to be. It’s as if, despite overcoming the situation of abuse, there was an obstacle that prevented them from experiencing those emotions that perhaps, in other times, arose spontaneously.

Psychological abuse isn’t forgotten, but it can be overcome.

The consequences of psychological abuse don’t disappear overnight. It’s a process that requires support, understanding, and a lot of willpower.

Although you may be afraid at first and there’s little hope about the possibility of healing the wounds, love, psychological therapy, and time will help you leave everything behind and move forward. You just have to give yourself the chance!

Learn How to Identify a Child Abuser
Being able to identify a child abuser is fundamental, but it's difficult since they seem trustworthy. Here are signs of child abuse and how to prevent it. Read more »
Link copied!
Interesting Articles
Conflicts
The Fear of Abandonment in Romantic Relationships