Dependent people are like addicts, and like any addiction, it's not easy to overcome. Recognize the common mistakes that mark co-dependency so that you can learn to be happy without a relationship. 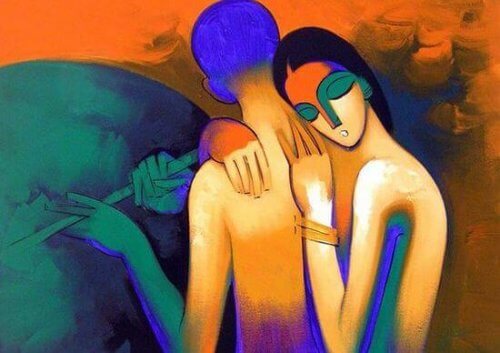 Dependent people are incapable of living alone outside of a relationship. When they end a relationship, they quickly look for someone to fill the void.

Sometimes, these relationships aren’t based on love but need. Because of this, over time they get bored, they argue too much, and they break up.

However, dependent people are not conscious of their problem, at least not until they feel the anxiety, desperation or unhappiness.

Until this happens, they never intend to leave this circle of dependency in which they are lost in. This is a complicated situation that isn’t easy to resolve.

Today, we’re going to look at the 5 biggest errors of dependent people to help you identify if you or someone you know is dependent.

Boundaries are necessary for almost all aspects of our lives. For example, you might like the taste of alcohol. However, you know that if you drink too much or you drink it every day, your health will deteriorate.

When dependent people get into relationships, they give up things that the other person doesn’t like. They do this so they don’t lose the person they have by their side.

Because of this, they end up with a low self-esteem and feel mistreated. They don’t express themselves truthfully for fear of pushing their partner away.

They give up the truth they need so that they don’t feel voids in their hearts.

Read also: How Well You Sleep Depends on What You Do Before Bed

2. Their partner is the center of their universe

Dependent people are very different with each partner. This happens because they change roles depending on who they are with.

You can start dating someone new and you should keep doing the same activities that you liked doing before. However, a dependent person changes.

They start to adopt their partner’s tastes. They give up the old things that they used to enjoy.

Also, they start to have obsessive-compulsive feelings. They think about the person they need all the time. They start doing things both for and in place of the other person.

They mold their life to fit their partners’, changing it completely and unreasonably. Why does this happen?

Dependent people don’t see themselves as independent people who share their lives with another person. They see the relationship as two individuals who melt into one being.

3. Their happiness doesn’t depend on them

When their happiness or sadness starts to depend on how another person acts, they find themselves with a big problem.

Suddenly, they give up being the owner of their emotions. This is a great responsibility that the other person starts to take on.

If they say something negative, their partner ignores them. This can make any great day turn dark and sad.

How you feel can’t depend on someone else. They aren’t you. They don’t control your feelings.

However, dependent people allow this to happen despite the fact that it hurts them.

4. They can’t stand the thought of being abandoned

This doesn’t mean that they haven’t pushed people away before. Perhaps they were the ones who took the first step. However, they probably had someone else waiting for them.

An emotionally dependent person never leaves their partner. Or, they don’t leave their partner unless they have a substitute waiting.

Because of this, they live with a constant fear of being abandoned. They put the other person’s needs above their own. They do everything they can to please their partner.

To say it another way: they submit themselves.

This generates an urgency to control the situation. Sometimes, this isn’t possible. When this happens, they feel a rush of anguish, anxiety, and desperation.

Read also: Why People Don’t End Relationships When They No Longer Work

5. They know they aren’t happy, but they can’t leave

Even though they might say they’re happy, they know that they really aren’t. Every time they find themselves alone, dependent people have a panic attack.

People have become the drug that they use to get their daily fix. If they can’t get it, they can’t stand the withdrawal.

If this sounds like you, start to make efforts to be alone. Learn to enjoy your own company. Don’t tie yourself to someone else just to fill the void.

It isn’t easy. But, who said that it would be easy to get over an addiction?

Something great happens the moment you learn to be happy by yourself. That marks the moment when you are truly ready to be with someone else.

Improve Your Health and Slow Down Aging with the FMD
Have you heard about the FMD, or fasting mimicking diet? Learn all about it and the health benefits of the FMD in this article! Read more »
Link copied!
Interesting Articles
Relationships
What to Do if Your Partner Is Verbally Abusive