4 Reasons Your Relationship is in Constant Crisis

Did you know that insecurity could be one of the factors behind your constant relationship crisis? Stop being emotionally dependent on each other and things will be much easier. 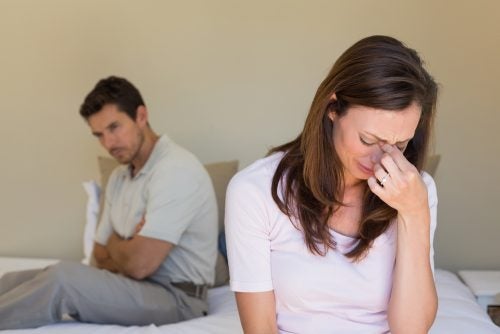 Is your relationship in a constant state of crisis? Does one argument just lead to another?

If so, it’s time you asked yourself what you’re doing to fix it and think about if perhaps you’re headed in the wrong direction trying to solve your relationship crisis.

Many of the causes will be known to you, but somehow you’ve been accepting them without being truly aware. Why does this happen?

The vast majority of reasons why your relationship is in a constant state of crisis typically result from beliefs that are deeply ingrained in today’s society.

Does this phrase sound familiar to you? One of the main reasons a relationship can go wrong is the thought that you can change the other person once you’re together.

This is a serious mistake that’s is often made unconsciously. During the infatuation phase, it’s easy to believe that anything really is possible.

Do they smoke and you don’t like it? “It doesn’t matter, they’ll change.” Do they dress in a way that you don’t really care for? “Well, I can get them to change that.”

You can’t go into a relationship wanting to change the other person. You must accept them as they are. If they smoke, for example, you either have to accept it or not start a relationship with them.

Another reason that your relationship may be in a constant state of crisis is having total dependence on your partner.

The society we live in places an extreme amount of importance on relationships. Even worse, the ideas and fairy tales we see in movies are still prevalent.

All of this adds to our fear of being alone, and in that, emotional dependence can find the perfect breeding ground.

You can’t let your happiness depend on having someone else by your side. If they leave you, will you really be nothing? What were you before?

You might not know how to answer that because thanks to your dependence because once you’re with someone, you forget who you are. For that reason, if the partner leaves you it makes you feel lost.

This, for example, can all can lead to an immediate sense of crisis.

It may feel like taking responsibility for the mistakes you make is a terrible thing. When something happens in your relationship, this inclination to avoid blame can be so strong that you tend to place it on the other person.

Without a doubt, this can generate countless arguments between the two of you. You always want to be right!

A relationship implies being part of a team, and a team doesn’t let another score against their own goal.

Try to talk it through, empathize with each other, listen to a different point of view, and do all this in a calm way. This will help you avoid a lot of problems in your relationship.

Unfortunately, communication between partners is sometimes not the best, and it winds up taking its toll.

4. You no longer have sex like you used to

Without a doubt, this is one of the greatest fears a couple may have: that their sexual attraction dwindles.

The lack of sexual desire can create a crisis in a relationship. Someone may have even said that the sex had become terrible! This means that your relationship is in trouble.

It’s normal for your sex lives to settle down a bit when you’ve been with a partner for a few years. Responsibilities and other obligations can take away a lot of the time you used to spend together.

However, don’t lose hope. As long as you can manage to have time as a couple, you’ll continue to enjoy sex, trying new things and learn together, and there will be nothing to worry about.

A relationship goes through changes. It will never be the same as it was during the infatuation phase. Furthermore, it is mostly because your young love becomes transformed into a mature love.

Before leaving, do not miss: More Sex or better sex?

Crises in a relationship shouldn’t worry you too much unless it starts to feel like one just leads into another.

Finally, the important thing is to identify the problem and resolve it in the best way possible. Many relationship crises have a solution, as long as both of you are looking for it.

Three Keys to Bring Back the Spark in a Relationship
Routine and monotony are two of the worst things for sex drive, so you must learn how to be innovative in order to bring back the spark. Read more »
Link copied!
Interesting Articles
Conflicts
How to Help a Woman who Has Been Abused