3 Mistakes That Make You Eat Worse

The food industry has made us think that some food options are healthier than their original. However, this isn’t always the case and can lead to bad eating habits. 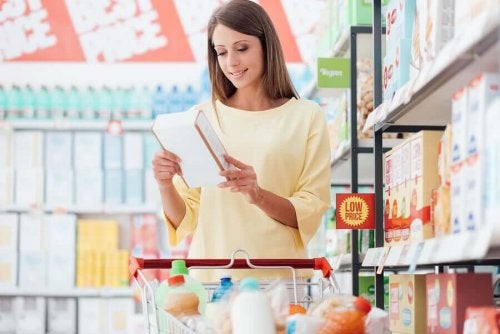 We often eat worse than we should because of dietary mistakes. Most of the time, this is down to ignorance or marketing influences, which promise to sell us products that aren’t as healthy as we thought. Knowing this, we need to pay more attention to food labels so that we can avoid buying lower quality products. Next, we will show you the 3 mistakes that people typically make when choosing food.

3 mistakes that make you eat worse

The food choices we make are crucial for our health and weight. However, with so many misunderstandings about food, it’s normal for us to make mistakes that make us eat worse. Which ones are the most common?

1. Nut milks instead of cow’s milk

Nut milks are believed to be a healthy alternative to cow’s milk, especially for people with intolerances. However, not all that glitters is gold. For the most part, these drinks contain more sugar and very little of what should be its main ingredient.

The amount of sugar is much higher than that of cow’s milk which can damage pancreatic health. This means that your body will produce more glucose in the blood. This leads to a higher demand for insulin which then encourages resistance and potentially develops type II diabetes at an early age.

So, if you aren’t intolerant, you should be choosing cow’s milk over nut milks. There are plenty of different fortified or lactose-free milks for people with intolerances to choose from.

If you want to opt for a nut milk, always check the label for one with the least amount of added sugar. However, these sugar-free alternatives don’t taste as nice.

In today’s society, sugar is classed as enemy number one for your health. There are now sweetening substitutes in products on the shelves that have a different name. This may cause us to believe that consuming these alternatives to sugar is healthier, when it isn’t.

Honey, maple syrup, panela, etc., are foods mostly made up of sugar. They have the same effect on glucose levels which also leads to significant stress on the pancreas.

Today, the only sweeteners known to have less of an effect on glucose levels are artificial sweeteners. However, moderate consumption is recommended as long term effects on the kidneys and liver are uncertain.

3. Pastries with no added sugar

These have the advantage of tasting as delicious as their sugary counterparts but without the negative impact on the body.

In truth, sugar isn’t the only enemy here. Normally, these foods are subjected to high temperatures and contain a large amount of trans fat.

Trans fat, along with the production of acrylamide during the cooking process, makes them potentially dangerous foods. In addition, it’s not strange to see artificial coloring and added preservatives in the ingredients which can sometimes be unsafe or harmful in the long run.

This is why it’s important to eat as much fresh produce and homemade products as possible, rather than mass-produced products.

So, what can we do to eat better?

One of the worst mistakes we can make when choosing food is believing that certain processed foods are better for our health because they promote certain advantages on their labels.

It’s better to select fresh produce over processed foods to maintain a healthy diet. It’s important to reduce your intake of sugar and sugar alternatives.

It’s also necessary to avoid frying in vegetable oils at high temperatures, thus limiting the consumption of acrylamide. This is a substance characterized by its toxicity and its potential to be cancerous in the long term.

Finally, it’s necessary to emphasize caution when consuming artificial sweeteners. The long-term side effects of these substances on liver and kidney health are not known exactly. Therefore, they should be taken in moderation.