The Three Best Ways to Use Ginger

Ginger is a spice that can add flavor to dishes. In addition, according to some research, some of its compounds can help improve the quality of the diet. Check it out! 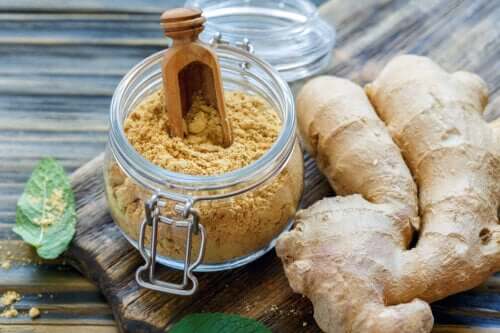 Ginger is a thick, gnarly root that has been used since antiquity in fine gastronomy, especially in alternative medicine. It has been used in Asia for more than 3,000 years, but its exact country of origin is not known. Use of the root spread from Asia to the rest of the world and is now commonly found in just about any market. Nowadays, researchers have studied its properties, and thanks to this it’s considered a health supplement.

The root of the ginger plant is used in many cuisines to flavor different dishes, whether sweet or savory. Overall, it’s known for the touch of spice it gives to foods and for being a rich source of nutrients that are good for your health. In this article, we’d like to share the three best ways to use ginger and its health benefits.

1. Tea, one of the best ways to use ginger

Ginger tea is one of the most common ways to take advantage of the properties of this root. According to information published in Phytotherapy Research, ginger has anti-inflammatory, antioxidant, and anti-proliferative potential, among others.

Therefore, you can include it in a balanced diet in order to promote your health and prevent disease. In addition, it can be useful to relax your body and soothe common ailments.

Also read: How to Grow Ginger at Home

2. Fresh ginger in your dishes

Next, the spicy touch of ginger is ideal for adding a unique flavor to foods and recipes. The amount you’ll use will depend on the intensity of flavor that you want to give your dishes. This spice can be grated, crushed, or sliced to add it to whatever you want.

There are many ways to use ground ginger at home. In fact, it’s easier to incorporate it into dishes this way than with the whole root. Right now, at the store, you can buy ground ginger to sprinkle on desserts, drinks, salads, or smoothies.

You can often find it at the store already ground. However, you can also prepare it at home using the dried root. If you choose to grind it yourself, you’ll need to first wash and sundry it, or in an oven. When it’s completely dry, cut into pieces and grind in a mortar or coffee grinder.

The properties of ginger

According to this article in the Journal of Medicinal Food, this root is a powerful anti-inflammatory and thus contributes to the relief of various forms of inflammation-related pain.

Furthermore, it blocks the release of prostaglandins and leukotrienes that cause inflammation.

In addition, it contains antioxidants that are useful for the ridding of free radicals and preventing various types of chronic noncommunicable diseases. Let’s look at their properties in more detail.

Thanks to its main active compound, gingerol, this root is good for preventing disease. As detailed in this study published in Natural Product Communications, gingerol has a variety of biological functions that include anti-inflammatories and antioxidants.

It helps with nausea and dizziness

People use it since ancient times as a natural treatment against stomach problems such as nausea, dizziness, vomiting, and diarrhea. In Natural Standard they affirm there’s scientific evidence to demonstrate that this plant helps reduce pregnancy-related nausea and vomiting. But, only when consumed in small doses and for short periods of time.

Check out this article Medicinal Uses of Ginger

It has antimigraine properties

Due to its anti-inflammatory and analgesic properties, ginger root decreases the tension, inflammation, and pain caused by migraines.

In fact, research published in Phytotherapy Research compares its effects with sumatriptan therapy and suggests it may be effective against this kind of pain. And, there’s also less risk of side effects.

Ginger as an aid for losing weight

A study published in the journal Metabolism found that ginger has properties that can speed up metabolism and thus help burn fat more easily.

This is because it promotes thermogenesis and increases the body’s natural ability to eliminate fat. In addition, it favors the feeling of satiety. Generally, it helps with weight control.

Of course, it’s important to clarify that by itself little or nothing can be done to fight weight gain. It’s important its consumption is accompanied by a healthy diet and physical exercise.

Consuming ginger is safe, especially when taken in moderate amounts in most healthy adults. However, extra care should be taken during pregnancy and lactation, with those with hypertension or use anticoagulant medications.

Consult a professional before you begin taking it as a supplement. In addition, bear in mind its consumption alone doesn’t replace medications and doesn’t replace a good diet.

How to Prepare Ginger as a Cough Remedy
Sometimes, especially when the cough is persistent, it can be very annoying. Read the article to learn how to prepare ginger cough remedy. Read more »
Link copied!
Interesting Articles
Did you know?
Why Do We Have Armpit Hair?