Cooking pasta is a pleasant task that can be improved by following these ten recommendations. Ready to try the best pasta ever? Then keep reading! 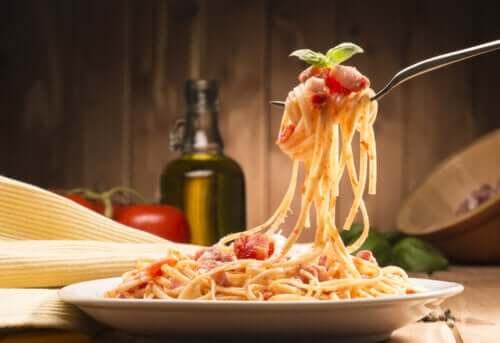 It’s one of the most versatile recipes known. It’s affordable and features an infinite number of recipes. Plus, don’t even get us started on how delicious it is!

And you know what’s even better? Pasta is usually enjoyed by children and adults alike!

But beware, it’s such a common dish in many homes that it isn’t always cooked in the right way. There are many mistakes that you may be making without realizing it. Even the most prestigious Italian chefs share these 10 recommendations for cooking pasta.

1. Start by choosing the sauce

Although it may seem that you’re starting at the end, a good pasta dish always begins with the sauce.

As you’ll see later on, there are some suitable combinations of sauces and pastas. For that reason, before putting the pot on the burner it’s important to choose the recipe you want to cook and to choose the form of suitable pasta.

To cook pasta, you need a large pot with high edges. Even if you only want to make one portion, you don’t have to stick with the smallest pot in the kitchen.

Pasta needs a lot of water and sufficient space to be able to move freely and avoid it sticking to itself.

You only need two ingredients in the pot to cook the pasta: water and salt. It seems simple, but it’s enough!

As you’ve seen, there has to be abundant water. As a general rule, you can calculate 1 liter of water for every 4 ounces (100 grams) of pasta – that would be the equivalent to the approximate serving for a person.

In addition, you can add a teaspoonful of salt for about 17 ounces (500 grams) of pasta. If you’re going to prepare a recipe with very salty ingredients as they can be sardines, amatriciana sauce, or with pecorino cheese we’ll be a little more careful with the salt when boiling the pasta.

Discover: How to Prepare a Low-Calorie Walnut Sauce

4. No oils or butter

It may seem like you’re repeating yourself, but it doesn’t hurt to insist on this point since it’s one of the most common errors. You don’t need to add oil nor butter to the pasta that’s cooking in the water.

It’s a popular belief that this way, you prevent sticking. On the contrary, however, you’ll only achieve a slippery pasta that later it doesn’t go well with the sauce. If you use a sufficiently big pot and with abundant water, the pasta won’t stick.

A good pasta dish has to be al dente: tender on the outside and a little bit harder in the center.

Once you’ve added the pasta in the pot, you leave the strong fire until it starts to boil. Then, stir once and lower the heat to medium. It’s good that the pasta moves inside the pot but it isn’t necessary for it to come out in gushes.

Normally, the recommended time of cooking will be on the packages of pasta. This is generally between 8 and 12 minutes depending on the type of pasta and its thickness. It’s important that you respect it because otherwise it’ll be overcooked. We can even say that the point to al dente always is the inferior time (that’s to say about 8 minutes).

Once the pasta is cooked, it’s best to remove it from the pot with a spiked ladle or a skimmer. Pour it directly into the container where you’ve cooked or heated the sauce.

You can also drain it with a strainer and set aside a little of the cooking water. It’ll be useful to add it to the sauce a little later. As it contains part of the starch that the pasta had, it’ll give the dish a shiny finish and will thicken sauce a little bit.

You don’t have to rinse the pasta with cold water – not even if you want to make a pasta salad. When kept warm, it’ll really absorb the flavors of the sauce.

7. The sauce before the pasta

Although you’ve begun with the recommendations to cook the pasta, a good plate of pasta must begin with the cooking of the sauce. For this, you must choose a very big casserole or paella, where the sauce fits and there’s enough room to add the pasta at the end.

Thus, everything can be served together and not in a bowl with the pasta and the sauce on top as if it were a topping.

8. Tips for cooking pasta: Finish cooking with the sauce

Once the pasta is cooked, pour it into the saucepan with medium or low heat. This way, you finish the last seconds of cooking with all the ingredients together and heat the dish. All the flavors will be perfectly mixed and all the pasta impregnated with sauce.

If it’s still dry, little by little you can add the water that you’ve set aside from when you boiled the pasta.

9. The perfect combination: each pasta with its own sauce

Although it can seem incredible, not all the sauces go well for any pasta. Did you know that spaghetti Bolognese isn’t cooked in Italy?

Some types of pasta go better with certain sauces. As a general rule we can say that:

10. The final touch: A good cheese

When you already have the pasta on its plate, finish by grating a little cheese on top. The most used cheeses are hard ones like the parmesan or the pecorino romano. If you grate it just before you’re about to eat, it’ll preserve its perfect texture and flavor.

Now, the only thing left to do is to sit down at the table and taste this delicious plate of Italian gastronomy!

Mushroom Casserole Recipe
Today we'd like to share an amazing mushroom casserole recipe for you to make at home. It's sure to delight your guests and family -- plus, it's nutritious! Read more »
Link copied!
Interesting Articles
Recipes
A Healthy Lemon Pie Dessert