10 Symptoms of Kidney Failure and How to Prevent Them

Your body can give you sign and symptoms of impending kidney failure, and here we show you what to look out for 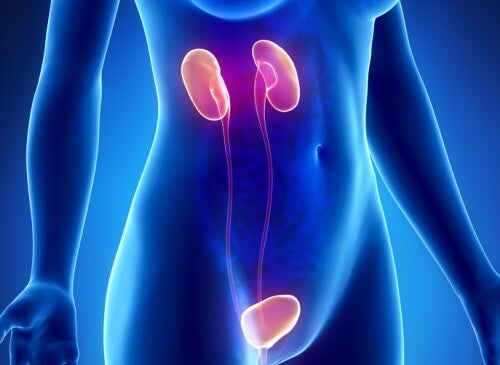 Sometimes, one may start to feel small symptoms without paying much attention to them. Some of these symptoms are an urgency to urinate, pain in one side of the back, and tiredness. Any of these could actually be symptoms of kidney failure. You should act when you start to feel these symptoms, in order to allow the kidneys to continue fulfilling their important function.

Kidney failure refers to a specific problem in how the two kidneys are functioning (or one, if you only have one kidney). Whenever they don’t function correctly, a lot of symptoms appear. These, in turn, cause changes in your body. And, according to what those changes are, this will show whether your kidney failure is acute or chronic. Let’s take a closer look here.

Firstly, one of the most noticeable symptoms of kidney failure are changes in our urine. It’s quite possible, of course, that this could be due to another condition. However, it is one indicator that alerts us that something is not right. As a result, you shouldn’t put off going to see a doctor.

Read more: What the Color of Your Urine Says About Your Health

Patients that suffer from kidney failure cannot remove extra fluid from the body. The kidneys are incapable of filtering normally, therefore fluids tend to accumulate. And so, another of the symptoms of kidney failure is to have swollen legs, ankles, feet, and even a swollen face.

Individuals with healthy livers produce a hormone called erythropoietin. This is responsible for producing red blood cells in charge of transporting oxygen to blood. But if you suffer from kidney failure, this hormone is produced is lesser quantities. As a result, your muscles, and even your brain, start to tire out due to lack of oxygen. It is a type of anemia associated with kidney failure.

It is normal, for example, for one to feel the urge to sleep, feeling exhausted.

By not being able to eliminate waste from the blood properly, the kidneys slowly lose their function and useless toxins and elements accumulate in the body. This results in itching and aches, and general discomfort as if something were disrupting you from the inside. You just can’t stop scratching.

5. Metallic taste in the mouth

The accumulation of waste in the blood (what is known as uremia) changes the normal taste of food ingested.  You might even stop taking pleasure out of eating because meat no longer tastes like meat, nor are sweets pleasant…which is why weight loss is common.  The difficulty that the kidneys have in eliminating waste has a lot of secondary effects, and a bad taste in the mouth is quite common.  In fact, patients usually state that they have an “iron taste” in their mouths.

Yet again, excessive waste in the blood causes the body to react to the uremia. Patients begin to vomit, feel ill, nauseated, and, consequently, lose weight. The stomach also tends to feel full when in reality, it isn’t. Individuals feel a heaviness in their body and start to slow down.

Another of the symptoms of kidney failure is a difficulty to catch one’s breath after an activity: climbing stairs, running, and even walking slightly faster than normal. This is due to two causes. Firstly there is an excess of fluid in the body and, secondly, this fluid could accumulate in the lung, consequently making it difficult to breathe. If you are also suffering from  anemia associated with kidney failure, this also makes it more difficult to catch one’s breath than before.

Anemia makes one feel colder than normal. It is also another one of the common symptoms of kidney failure.

If you have circulatory problems, then the blood won’t be filtered correctly. The erythropoietin hormone is affected, and, as a result, oxygen doesn’t arrive in normal doses to the brain. It doesn’t obtain sufficient energy and concentration problems begin to emerge.  In addition to that you will feel tired and even dizzy. It’s also normal to experience minor memory loss.

Some people with kidney problems can suffer from back pain or side pain. This, of course, is a symptom that could sometimes be confused with other conditions. This pain extends from one side to the leg, and is a very acute pain that sometimes prevents one from leading a normal life. This symptom is probably associated with polycystic kidney disease, a disease that creates cysts that fill with fluid in the the kidneys and even in the liver. It is very painful.

How can I prevent kidney failure?

Kidney failure is, in many cases, due to genetic factors. However, you should bear in mind that healthy habits can reduce the risk of suffering from his dangerous disease by up to 60%.

So how to do it? Avoid becoming overweight,and watch your cholesterol. In addition to that, walk daily for at least an hour, and above all, take care of your diet in the follow ways:

Natural Remedies for Kidney Failure
Today we'll share with you a few natural remedies for kidney failure with foods, medicinal plants, and natural techniques that are quite effective. Read more »
Link copied!
Interesting Articles
Illnesses
What are the Effects of Gluten on the Body?