10 Signs That Indicate Your Lungs May Be Failing

Your lungs may be failing if you notice that you start to be short of breath while carrying out daily activities, if you wheeze when you breathe, or if you get excessively tired. 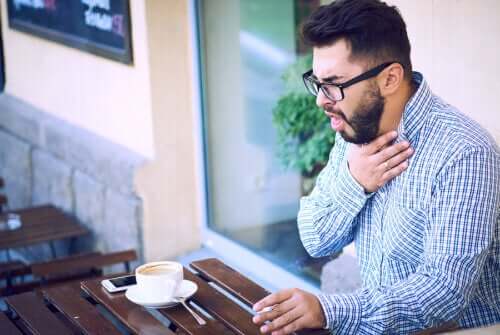 There are several signs that may indicate that your lungs may be failing. One of them can be a feeling of fatigue when performing different activities, for example.

Of course, fatigue can indicate many issues and not necessarily a respiratory system problem. However, when it occurs with other symptoms it can be a sign that your lungs may be failing. In any case, it’s best to consult your doctor for a proper diagnosis. This is how Dr. Arantza Campo Ezquibela explains it:

“Although many causes are harmless and easily corrected, any breathing difficulty requires that you contact your doctor.”

1. Dyspnea, one of the symptoms that your lungs may be failing

Dyspnea is a feeling that’s difficult to define. According to Dr. Noah Lechtzin, it’s defined as: “unpleasant or annoying breathing. Depending on the cause, it is experienced and described differently by patients”.

According to health experts, this feeling can occur both in healthy people, when making slight efforts, such as climbing stairs, for example, and in people with some specific disorder.

Breathlessness can be a symptom of asthma, lung infections, heart failure, pulmonary thromboembolism, etc. Therefore, patients should be aware of how to act if they experience it.

Pressure in the chest usually feels as if a heavy object has been placed on the chest and air intake is difficult. This can occur during both physical activity and rest.

However, it’s likely to be accompanied by pain when performing common actions such as: Coughing, walking, eating, deep breathing, or bending over. Are you experiencing this kind of chest pressure? If so, don’t ignore this symptom and go to the doctor for a check-up!

Breathing is such a common process that we barely even notice it’s going on. So, if you start having difficulty breathing–even at rest–it can be a sign that your lungs are failing. Especially if it’s accompanied by other symptoms.

Read more: The Cough Associated With a Cold

Suffering from several episodes of flu during the winter is quite normal and common, since the temperature contrast is conducive to this type of illness, among other issues. The problem isn’t the flu as such, but the recovery process. When it takes a while, it’s time to go to the doctor.

Although it may take the body a few days to recover from the flu, it isn’t normal for the process to take too long.

In these cases, the specialist will probably consider checking your body’s defenses first, as well as your lungs.

Wheezes are high-pitched sounds (like whistles) that are produced during breathing, that is, when inhaling and exhaling. This may indicate that the airway is partially blocked.

Have you noticed that slight wheezing appears when you breathe? This is definitely an alarm that indicates that your lungs may be failing. To confirm this (or rule it out), it’s best to go to your doctor for a check-up.

Sputum is the name given to the mixture of saliva and phlegm in the airways. It’s common in smokers who usually have crises in the morning. This problem causes a constant need to spit and expel phlegm. If you suffer it frequently we should consult your doctor.

If it’s an advanced pathology you may be coughing up blood. For example, it can be the case of pulmonary embolism or tuberculosis.

Don’t ignore coughing up blood without apparent explanation. It needs to be checked urgently to rule out any negative prognosis.

Prevention is always the best medicine

These changes in the body are a sign of alarm, so it’s not good to ignore them. Being attentive and going to the doctor without delay could help the specialist detect any illness as soon as possible.

At the same time, you need to keep in mind that taking care of your health isn’t only about recognizing changes in your body and going to the doctor. It’s also very important to practice prevention on a daily basis.

Yes, there are some things you can do to strengthen your lungs. That way, you’ll avoid damaging your respiratory system, something that will undoubtedly help you to enjoy a better quality of life.

Put these 5 basic recommendations into practice to take care of your lungs:

The most common lung diseases

Among the health conditions that most attack the respiratory system are asthma and chronic obstructive pulmonary disease (COPD). The latter usually appears in people who have smoked for more than two decades, although it can also affect people with less time.

Its appearance is mainly attributed to the consumption of tobacco. However, there are also cases in people exposed to chemicals, air pollution, and dust.

Now that you’ve discovered those symptoms that can alert you that your lungs may be failing, start taking precautions. We emphasize the importance of early detection and care that can protect your lungs. And, if you notice any sign of alarm, we recommend going to the doctor.

After all, they’re one of the most important organs for your body. Take care of them in the right way and improve your quality of life.

How to Get Rid of Mucus in The Lungs
Sometimes, when we get sick and fail to treat the issue, we end up with mucus in the lungs, causing congestion, and coughing. Find out how to get rid of it. Read more »
Link copied!
Interesting Articles
Illnesses
The Connection Between Erectile Dysfunction and Diabetes