Paper towels are normally used to clean up spills, but we've found 10 new and creative ways to use this popular cleaning product. Check them out here. 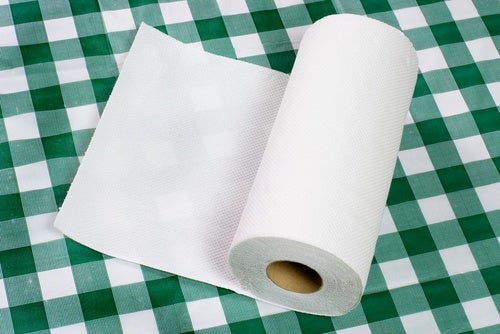 Paper towels are a popular cleaning item today. They’re found in homes around the world and are used as an alternative to rags to clean surfaces.

But, despite their many uses, many people limit them to cleaning spills or absorbing excess fat from foods. These are their best known uses and what’s portrayed in ads.

The truth is that the uses of paper towels don’t end here. Like many other household items, they have a few alternative uses to make our chores and lives easier. Want to learn more?

Remove corn silk from the cobs

The little fibers that cover corncobs are not easy to remove and can take a lot of time in most cases.

One simple sheet of paper towel can help to remove them without a lot of effort in a matter of seconds.

How? Moisten a paper towel and rub it across the corn. It’s that simple!

We recommend reading: Is Popcorn Healthy?

After using a bottle of oil a few times, it will get greasy and make the bottle inconvenient to pick up and use.

To prevent this, wrap a paper towel around the bottle and secure it with a rubber band at the neck. This way the oil will accumulate there and won’t reach the rest of the bottle.

Skim the fat off broth

Chicken or beef broth often has a layer of extra fat floating on the surface.

To remove it, simply cover a strainer with a paper towel and then pass the broth through it.

Use paper towels to prevent rust on cast iron pots

Cast iron pots and pans tend to rust easily when not treated properly.

It’s really important to dry them well before storing, and as an additional step, you can put a paper towel between them.

The majority of vegetables need to be washed and disinfected before storage or use.

The problem is that there is almost always a little residual moisture left on them after washing.

To quickly and completely dry them, take two sheets of paper towel and cover a container or salad bowl, then add the vegetables that you want to dry.

Do you think your seeds might be too old to germinate? If you doubt they’ll grow because they’ve been stored for too long, try the following trick:

One trick to keep bread fresher, longer is to store it in the refrigerator. However, for it to be even more effective, it’s a good idea to wrap it with a paper towel to catch moisture, helping to prevent the appearance of mold and further prolong the shelf life of this food.

Absorb the moisture from brown sugar

In general, as the temperature increase, brown sugar releases its natural moisture, turning it into a hard mass.

If you notice this happening to your sugar, put it into a lidded container with a paper towel and the next day you’ll see how it’s returned to its original form.

See also: A Trick for Insomnia: Salt and Sugar

One of the main properties of paper towels is their ability to absorb substances. When it comes to fats and oils, it’s best to remove the excess.

If you want your fried foods to stay crunchy and remove extra oil, put a few sheets of paper towel down on the plate and let the fried items sit there for a few minutes to remove the excess grease.

Do your vegetables start to go bad really quickly? To keep this from happening, wrap them in a few sheets of paper towel before storing them in the fridge.

How to Make Crispy Fries
Do you like fries but don't know how to make your homemade fries crispy? In this article, we'll give you some tips for delicious crispy fries. Read more »
Link copied!
Interesting Articles
Did you know?
New Year's Traditions Around the World