We have all suffered from pains in our body that are somewhat mysterious from time to time. In today's article we'll look at 10 of the most common ones. 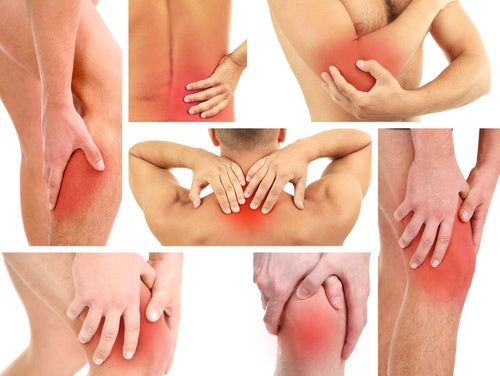 Everyone has experienced random body pains, both mysterious and sometimes persistent, at some point in their life. Most people don’t pay much attention to them, and then often the pain just goes away on its own. There are, however, 10 mysterious pains that you should not ignore. Keep reading to learn about them.

These body pains aren’t that much different from the strange noises your car may make every once in a while. It makes some sort of buzzing or whistling, and then the noise disappears as quickly as it came. Those of us who aren’t mechanics won’t think anything else of it. But, just like your car, the aches in your body generally get worse over time, and it is usually a sign of an much larger, underlying problem.

Although not all pains are indicative of an extreme emergency, there are some mysterious body pains that we simply shouldn’t ignore. Although very few people are too keen to visit the doctor, this is so much better than it becoming a medical emergency that could have been detected or treated before the problem turned into a life or death situation. So, which of these mysterious pains should not be ignored?

Even though this section focuses on heart disease, chest pain is not the only sign that something is wrong. Imagine this scenario: it’s a hot summer day and you’re sweating while cutting the grass. You stop to wipe your forehead, when suddenly your jaw starts to hurt. Everyone has taught you to worry about chest pain. So you don’t think anything about it. You could have squeezed down hard on your jaw because you were stressed at work.

The pain associated with heart attacks often times shows itself in different areas of the chest: the shoulders, the arm, the abdomen, the lower part of the jaw, or the throat. If you experience sudden shoulder or jaw pain, stop doing what you are doing and let someone know; then get medical attention.

Lower back pain is very common, but it could be a sign of more than just achy muscles. Back pain can also be a symptom related to kidney problems. Lower back pain could be related to a kidney stone, which usually disappears on its own (albeit quite painfully). If your kidney becomes infected and swollen, it will cause discomfort in the lower back. If a kidney tumor has grown big enough, it could also cause lower back pain.

Sometimes there is not a clear explanation for abdominal pain. Problems with nearby organs like the kidney, the lungs, or the uterus, could create abdominal discomfort. Pain in the right lower quadrant could mean that your appendix is inflamed, which means that you need surgery quickly.

Calf pain generally sets in at the end of a long day (or a long climb up steep steps). But calf pain could also mean that something else is wrong, especially when unrelated to any type of injury.

The legs have a system of arteries and veins that move blood to and from the muscle and the heart. Veins that are visible from underneath the skin are known as superficial veins, as they move blood to deeper veins. Small valves inside the veins prevent blood from flowing down the wrong path. Coagulations can form, however, due to a ruptured vein. This is caused by deep venous thrombosis (DVT), which could cause pain in the calves and leg swelling.

5. Tingling in the arms and legs

If you’ve ever crossed your legs for a long period of time, you’ve probably experienced this type of painful tingling in your legs and feet; this is caused by reduced blood flow. Fortunately, the tingling goes away soon after standing up and moving around.

If your feet or hands feel this way, however, even when you haven’t crossed them for a long time, it could be a sign of nerve damage. Symptoms like tingling, numbness and burning point to peripheral neuropathy.

If you feel pain in any particular part of your body, this means that that area needs attentions. You could have fibromyalgia, a mysterious disease that causes pain and discomfort and that affects women more than men. Fibromyalgia also seems to make us more sensitive to physical pressure or pain, which often times means more difficulties in sleeping.

It may seem unlikely, but depression could also cause random, inexplicable body pains in different areas. This could show itself as back pain, headaches, and a heightened sensitivity to pain.

Testicular pain should never be ignored, because it generally means that the condition could worsen if ignored for too long. Anything could cause testicular pain, from a hernia to cancer. The spermatic cord could also be twisted, causing testicular twisting.

Inflammation of the epididymis, a spiral tube located in the lower part of each testicle which acts as a storage facility and delivery unit for sperm, could also cause testicular pain.  If your testicular pain is also accompanied by a strange feeling, it’s likely that you have varicose veins, known as varicocele.

One of the most common symptoms of pelvic inflammatory disease is pain or discomfort in the pelvic region during sex. This is a bacterial infection in the uterus or Fallopian tubes, which causes red, swollen, and painful tissue. The inflammation could cause scarring, which could lead to problems such as infertility.

See also: 11 Sexually Transmitted Diseases You Need to Know About

Osteoarthritis, the general wear related to age and cartilage wear, causes the bones to rub against one another. It is a common source of joint pain, but it isn’t the only cause. Stiffness and swelling in the joints could be caused by lupus, a disease that oscillates between periods of flare-ups and remission. Other symptoms of lupus include fatigue, hair loss and fever.

Hepatitis, a disease that affects the liver, also causes joint pain. Your body pains could also be due to arthritis, one of the most serious of which is rheumatoid arthritis. Rheumatoid arthritis is an auto-immune disease, which means that the body’s immune system becomes out of control, and attacks its own tissue.

Four Natural Remedies to Sooth Abdominal Pain
Abdominal pain may occur as a result of indigestion. However, if the pain is frequent and intense, it could be warning us of a bigger problem. Read more »
Link copied!
Interesting Articles
Illnesses
The Relationship Between Asthma and Rhinitis

Illnesses
What's the Cause of a Strong Body Odor?

Illnesses
The Causes of Alcoholism: Consequences and Treatment

Alcoholism is the excessive consumption of alcohol, where one loses control over how much they drink. Below we'll explain some…

Illnesses
What Does a Cough with Green Phlegm Mean?

What happens when green phlegm accompanies a cough? Is it always an infection that should be treated with antibiotics? This…

Illnesses
What Is Papillary Edema or Papilledema?

The papillary edema, also known as papilledema, is a pathology that occurs in the eye. It consists of an inflammation…

The appearance of cold sores in children can be worrying at first. These lesions are benign and tend to disappear…

Interesting Articles
Illnesses
The Relationship Between Asthma and Rhinitis

Coconut milk is a type of plant milk derived from coconut flesh. Due to its delicious flavor and nutritional value,…

Healthy mind
What Are the Symptoms of Alexithymia?